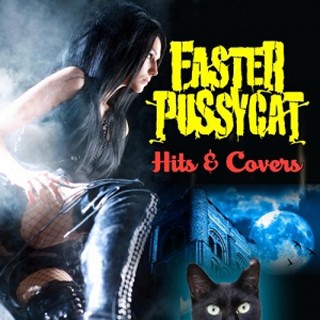 Review:
The latest offering from Faster Pussycat, a digital only album called Covers & Oddities (or Hits & Covers), is a collection of tunes done in, well, whatever fashion frontman Taime Downe could be bothered to do. You have a mishmash mixture of rock, pseudo blues and industrial backdrops to some really good songs in their original incarnations.

And that’s where it starts to go wrong. Being a huge fan of Faster Pussycat back in the day and being witness to the band split and the different direction that Taime Downe took the name, I feared the worst for this collection — especially after the last covers album that I sat through on name value alone (see L.A. Guns‘ Covered In Guns). As soon as it started with the re-recorded version of “Bathroom Wall” I just knew that I was going to be shit on from a high height. But in the spirit of giving it a fair chance I sat through Covers & Oddities objectively several times.

The album kicks off with the previously mentioned version of “Bathroom Wall”, which as any fan knows is a cracking number and a staple of the live show. This version however is just bad — it sounds familiar and has the hooks and riffs, but the pitch and notes are all wrong. AC/DC‘s “If You Want Blood’ follows and surely this cannot go wrong… eh no. Again musically the song sounds okay though slightly off, so props to the band for not doing it exactly the same as the original… but my god the vocals are awful, Taime does not suit this at all! “Wonderwall”, by Oasis is up next and it’s just plain bad both vocally and musically — at this moment Covered In Guns sounds like a masterpiece.

Faster Pussycat‘s hit “House Of Pain” is a remix here, like something off of Between The Valley Of The Ultra Pussy’, so you know exactly what you’re getting. You’ll either like it or hate it… guess which way I’m leaning? Then we move onto Rick Springfield‘s “Jessie’s Girl” which has all the same themes as before — this is turning into a train wreck of an album. “Don’t Change” by INXS starts off really, really well until Taime Downe opens his mouth — the song is really good apart from him singing. Then we have “Bad Things” by Jace Everett which surprisingly works rather well mainly because Taime sounds absolutely sleazy here. Good job, the train crash is temporarily averted.

Then oh dear… FFS, the “Monster Mash”. Why oh why did they think this was a good idea? What utter crap… it looks like we just crashed. The sound of Ted Nugent‘s “Hey Baby” starts and gets things back on track — this is more like it and sounds like what Faster Pussycat are known for — while their cover of the Scorpions “Lovedrive” sounds great, but vocally it doesn’t work. I look at the sleeve and see Led Zeppelin‘s “Misty Mountain Hop” is next… hands up who thinks this is going be great? It’s not. Then it’s Techno/Industrial time again with Guns N’ Roses‘ “It’s So Easy”, a Julian Beeston remix apparently, and let me put this in context, if this song was loo paper it would be of the thin variety that your fingers keep poking holes through when you wipe your ass. Not even some awesome guitar work can save this cover. The classic Judas Priest number “Hell Bent For Leather” continues the trend of a great sounding track that absolutely dies when Taime opens his mouth. Then we have “Run Rudolph Run”, something so musically abhorrent that I have to wonder why anyone would consider it a good idea to include it here — it’s just utter shit. Not even Cheap Trick‘s “She’s Tight” can save this album from just imploding in utter mediocrity at the end.

Covers & Oddities can be summarized up in the following way; musically it ranges from bad to awesome, but Taime Downe‘s impersonation of a vocalist ranges from barely okay to utterly abysmal. Now, with the inevitable Decline Of The Western Civilization association you have been waiting for I’ve decided to go with an overall ‘Eat A Full Bag Of Shit’ rating for this album — this thrown together collection of previously released covers is total bollocks.