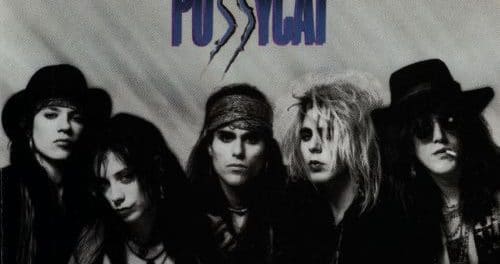 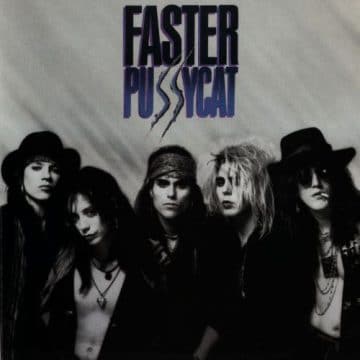 Review:
In 1987, there was always a whirlwind of new music for us hard rock music fans to indulge in. In my case, it was more about overindulging to a musical point of obsession. It was hard to keep up with all the new material that was being released, as hard as I may have tried. My first introduction to Faster Pussycat was in a great music publication called Blast Magazine. For those who recall, in 1987, Blast was a rather new publication. At this time, I was starting to amass a rather large collection of rock magazines to which I regretfully admit to no longer owning. These magazines filled the shelves of our local smoke shops.

The first magazine that I really gravitated towards was Circus. It was a publication that included primarily live band photos. It also included song lyrics, various gear segments, cool gear ads, two page pin ups and of course short analogies of the featured bands accompanying the live photos. The next magazine I would discover would be Metal Edge. It was very different from Circus. It featured band photos that were taken at photo shoots. It also included the rock on the rise segment, album reviews with full track listings and of course the ever so famous band hotline numbers. For those who remember, Gerri Miller was the editor and in my eyes she really seemed to know her stuff. From there, I would discover other publications such as Hit Parader, RIP and Blast. Although similar, the difference between Blast and Metal Edge though was the paper quality. Blast featured much thicker paper and the photos just looked very cool on this superior product. The stories were up to par with the other publications. I became a big fan of this magazine and would hunt it down at my local smoke shop monthly.  Unfortunately, Blast did not last that long but in its short time, I would discover many cool bands such as Faster Pussycat, Guns N’ Roses, LA Guns, etc beneath its heavy pages.

Upon my discovery of Faster Pussycat, I would make frequent stops at my local record store to find this band’s debut album hoping to soon add it to my collection of cassette tapes. At that time, the mall that I would frequent had three record shops. —Mister Sound, Sam The Record Man and A & A’s. I would spend afternoons journeying to these shops, riffling through the album bins. On one particular morning, I had my Mom drive me to the mall with my wallet tucked firmly in my back pocket. Wearing my faded Levis slim fit blue jeans, tucked into my Reebok high tops, I would venture into the store and hunt down the cassettes I so desired. On this particular day I would purchase Aerosmith’s Permanent Vacation, Guns N’ Roses‘ Appetite For Destruction and of course Faster Pussycat‘s Faster Pussycat. I would make my way to the counter to get the cassettes in long plastic boxes that only the cashier could remove for you in hand, pulling out my wallet, digging deep into its contents and laying down the hard earned cash I received from my Toronto Sun paper route. Of course please remember, this was 1987, the debit machine would not arrive for many years to come. As we left the store and drove back home, my anticipation was mounting. What would I listen to first?

I believe I initially threw on Faster Pussycat, but all these years later, I can’t be so certain. The thing I most recollect at the time was that I really was not fond of the Guns N’ Roses album. I found the singer to just be too different. It took me many listens to really adjust my ears to what was going on. But that is a discussion we will save for another day. Today we are talking about Faster Pussycat’s debut album.

Side One:
As I throw this one at this very moment, it brings back some great memories. The album opens with “Don’t Change That Song”. At the time, this song really said a lot to me in terms of attitude. I recall my school years and how it was not cool to be a “metalhead.” We were somewhat outcasts. For me, I got off lightly, sometimes personality plays into that equation, but I do recall others being treated like “Eddie Weinbaur” from the cult movie Trick Or Treat. This song was really saying to me, “Don’t touch my music or I’ll crack some skulls!!!” It was the whole persona that went along with the music we listened to. In my eyes, I was a bad ass. We didn’t want our parents or teachers listening to our tunes, but with that said don’t try and turn it off either. This thought in itself brings me to 2017. How is it that the younger generation listens to country music? Seriously? You don’t listen to the music your parents like. Way too reserved and unrebellious. Isn’t it?

“Bathroom Wall” would follow and holy shit do I dig this song! It is oozing with sleaze and debauchery. The whole premise of this song makes me chuckle. I can picture myself as a hormone enraged adolescent boy picking up the phone and saying “Hi, it’s Tyson and I got your number off the Bathroom Wall.” Not that I ever actually did this, but the thought may have crossed my mind had I actually seen a number on a bathroom wall. Imagine a country song in 2017 phrasing words like that? Can’t really see it. “No Room For Emotion” is a sleazy ballad type song that epitomizes what it may have been like to be a musician living on the Sunset Strip in 1987. It has a slow groove that creates the perfect mood of what singer Taime Downe is trying to convey.

Next is “Cathouse” which on the original Faster Pussycat demo was called “Whorehouse.” For those who may remember, Downe is making reference to the LA club that him and Riki Ratchman were affliated with at the time, so hence the title name change. Very cool fast rocker featuring great honky tonk piano. “Babylon” was cool because if I recall, I put this on in the school bus one day. Well, it went over quite well. Kids that were not hard rock fans thought it was the coolest thing they had ever heard. I distinctively remember, no word of a lie, a fellow named Michael Hunt absolutely going crazy for this song. As I think back, I think the attraction to this song was due in part to The Beastie Boys‘ “Fight For Your Right To Party.” That song was huge at that time. In some ways, “Babylon” was reminiscent of that song. So it truly appealed.

Side Two:
So here we are, picture it, it’s 1987 so now we shall turn over the tape. “Smash Alley” starts the second side off in true sleazy fashion. It’s like you can picture the band, as a gang going in for the fight of their lives. It starts with a cool groove beat provided by drummer Mark Michaels with the bass of Eric Stacy coming in and the guitars of Brent Muscat and Greg Steele following behind. The guitar riff has a ’60s surfer feel to it. As Downe proclaims “Lipstick junkies and runaways” in the chorus, it gives you an intense feeling of something going very wrong. “Toto I don’t think we’re in Kansas anymore” quickly comes to mind. “Shooting You Down” continues the all out musical assault on the listener. Downe starts off in a lower register, but quickly lets us hear that ear piercing snarl that we have all come to love. The drums and bass keep the song in check as the band is taking the listener to the edge, but you’re never actually falling over. You’re looking down 100 feet on the ledge of a building, but somehow you’re not going anywhere. You can feel the intensity of life in LA. The rawness is intangible.

“City Has No Heart” keeps that mood moving as Downe non-challantly proclaims in the chorus “This city has no heart, it’s got a mouth that keeps running and baby it won’t stop.” So cleverly catchy. The breakdown before the guitar solo is so damn cool and builds up ever so sweetly. “Ship Rolls In” features a great metaphoric analogy that in the ’80s was the perfect formula for success. Tongue in cheek lyrics, sleaze oozing all over place. “Bottle In Front Of Me” closes out this amazing piece of sleaze rock history. It’s bands like Faster Pussycat that created such a cool L.A. street vibe. It’s only fitting that there be a song that references the overindulgence of alcohol. I am sure for this band, this was nightly occurrence. At least, my imagination led me to believe so. Thinking on it though, I think it was an accurate assumption.

As it turns out, after 30 years of having heard this album so many times, I don’t find anything on it that is out of place. As I listened intently, I thought to myself, this music is classic. No one has really ever emulated this sound again. It was the time and the place that this music came from. It was more of a persona that the band created threw their imagination and their songs. It was the nights spent in L.A., playing the clubs, living in dirty shit holes and drinking outrageous amounts of cheap liquor — the hookers, the junkies, the street trash. Everything they would have seen and done on a nightly basis. The thing I respect most about this band, with the music leading you to believe this, is that they made it out alive. I think that in itself is a miracle. Faster Pussycat’s debut album, to me is a great piece of rock n’ roll history that should live on forever.

Nós não possuímos o direito autoral do clipe! We do not own the copyright of the clip!-IN PORTUGUESE-Clipe da banda Faster Pussycat – Bathroom WallFaster Pus…

FASTER PUSSYCAT – “Don’t Change That Song” from the first album “Faster Pussycat” (1987), watch out the new album “The Power & The Glory Hole” as Special Eur…