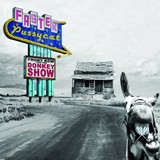 Review:
Faster Pussycat‘s first live album, Front Row For The Donkey Show, was released in 2009 to lackluster commercial response, yet to much anticipated delight for long suffering fans of the band. The intrigue of this album is the stylistic offering of ‘new and old’, with several industrial-influenced songs from their 2006 studio release (after a fourteen year hiatus), peppered in with the classics from the late eighties and early nineties.

Front Row For The Donkey Show kicks off in grinding, crunching fashion with the title track to their latest album “The Power & The Glory Hole”. After years of band breakups, bickering, line-up changes and ultimately territorial pissing over who was able to even perform under the Faster Pussycat name, Taime Downe prevailed as the last original Pussycat left standing. As the distinct and recognizable voice of the band, Downe shows that he still has the lungs and can incite a rock and roll riot with his gravelly, yet strangely seductive, vocals.

The crowd applause gets louder and the raw energy more palatable with the familiar opening riff of “Cathouse” (dedicated to one of the most popular and hedonistic clubs on the Sunset Strip in the 80’s). For glam fans, hearing this song is like slipping into a well-worn glove, it just fits. Other than Taime‘s substitution of ‘whorehouse’ instead of ‘cathouse’ throughout, this sleaze classic feels as fresh as it did when it was first released.

“House Of Pain”, the radio-friendly 80’s metal ballad and arguably the band’s most recognizable song, makes you want to pull out your lighter..er, cellphone, and swing your arms from side to side. While one would never describe Taime‘s vocals as particularly technical, he proves that he can still sing with raw, gut emotion when he wants to.

Long-suffering fans were again rewarded with the timeless classic “Bathroom Wall”. Taime delivers his stripped-down, balls out message with hormone-infused fervor. Much like “Cathouse”, this 80’s anthem stands the test of time and is, hands-down, a crowd/fan favorite.

The album concludes with a cover version (yawn) of the Rolling Stones‘ “It’s Only Rock And Roll”, yet sadly, does not introduce any new Faster Pussycat material. In spirit, I am not a big fan of live albums, but Front Row For The Donkey Show captured the essence of Faster Pussycat‘s diverse catalog of music to my satisfaction. Overall, this album does deliver; and while I do consider this album a ‘must have’, I’d still much rather see Taime Downe and former guitarist Brent Muscat kiss and make up!