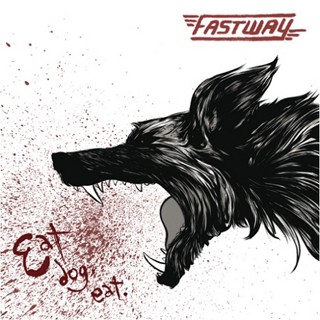 Review:
Fast Eddie Clarke may be getting a little long in the tooth, but the old guitar-slinger still has a few tricks up his sleeve. With an entirely new band fronted by Little Angels and Gun vocalist Toby Jepson, Clarke has resurrected the Fastway moniker in an attempt to cash in on the current ’80s rock revival with the band’s first studio release in over twenty years — with varying degrees of success.

Unfortunately for the members of Fastway, their current compositions are always going to be compared to Dave King sung classics such as “Say What You Will” and “Easy Livin'”. Matching the sonic-quality of such underrated gems isn’t easy, but the song “Leave The Light On” accomplishes just that. With Clarke‘s minimalist approach and signature guitar tone this track could easily be the third best recording in Fastway‘s storied history and proves without a doubt that Jepson was an excellent choice as new frontman.

The magic of that killer song begins to seem like a fluke until Eat Dog Eat heats up on the second half. “Dead And Gone” reminds me of Dio with its slow build-up, one that drags on so long you begin to wonder if the song will ever gain momentum — but just past the three minute mark it finally takes off with a bluesy riff and matching vocals. Even better yet is “Sick As A Dog”, which once again captures the Fastway sound of old with another memorable hook courtesy of the former Motorhead guitarist.

While parts of Eat Dog Eat remind us what made Fastway so great in the first place, at other times the band seems lost and unable to rekindle that old magic. “Fade Out” for instance, had me doing just that, while “Lovin’ Fool” never seems to get past bar-band status. As for “Who Do You Believe?”, it seems to be stuck in neutral and is nothing more than filler.

Eat Dog Eat is much like Fastway‘s entire career — hit and miss. They’ve always been that way, so why change now? But every once in awhile Fast Eddie lives up to his nickname and stumbles upon a flawless guitar lick that makes listeners overlook some of the album’s flaws.