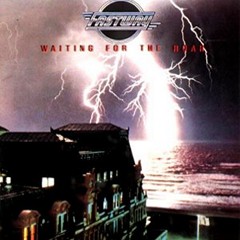 Review:
Formed by Fast Eddie Clarke (a guy so talented that Lemmy replaced him in Motorhead with two guitarists) and Pete Way (UFO founder and bassist), Fastway were a critically acclaimed band that never seemed to blowup to the success they deserved. Fronted by Irish vocalist Dave King (now the man in Flogging Molly), they had a power chord, riff laden, synth backed, fists raised in the air sound that was the very definition of an ’80s metal band. We are talking apocalyptic ruin, fire burning, cod piece wearing-tastic stuff here.

Fastway‘s third release Waiting For The Roar kicks off with “The World Waits For You”, a swaggering, synth driven, three chord strumming track — it’s mellow, but catchy enough to get you started and contains a delightful little solo. “Kill Me With Your Heart” follows and is immediately more energy laden — again the synth and the guitar mesh effortlessly, and Dave King sings this with a totally cheesetastic ball-grabbing enthusiasm that will have you nodding along. “Tired Of Your Love” again leads with some synths (see the pattern here?), but is really driven along by a lovely little riff by Fast Eddie. Again, it is an alright number, nothing fantastic, but it keeps the flow moving along nicely. The forth track “Change” has ballad written all over it, as it’s very quiet with soft guitars and mournful vocals — it is a definite change of pace, but is filler for me. “Move Over”, which starts off in the usual fashion, but King also kills this one poor vocals… then enter Fast Eddie and the song kicks in and drives along — a right head nodder and a superb change from the previous track.

“Little By Little” is unusual in that the synth is nowhere to be heard at the start of the song, it has an excellent opening but fails to excel from there, falling flat for the most part. “Rock On” follows, and again no synth at the start as this is a guitar driven little number with a catchy chorus — it’s OK, but nothing to write home about. We then move onto a signature Fastway tune, “Waiting For The Roar’, which has everything that’s to be expected from the band — a good riff, a pounding beat (and synth), King singing his socks off, a fabulous chorus and it results in an undoubtedly all round top tune. If you put aside the chorus, “Girl” this is THE track on the album, a fantastic combination of guitar and synth, with some great breaks and chord changes. The album finishes off with “Back Door Man”, a nice number that finishes off the album in swaggering style, but we’ll leave the smut to Big Cock.

What do I say? Waiting For The Roar a typical metal album from this time. There are a number of really good tunes contained here and nothing offensive. Maybe there is too much synth… but hey, that’s what was in style at the time. With Fast Eddie Clarke involved you know it’s not going to be a bad album… instead it is a good album from a great band.