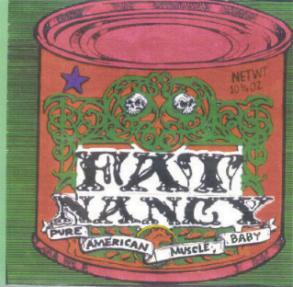 Review:
From the ashes of Uncle Max’s Cosmic Band crawls Fat Nancy, the latest project from the tattooed Alex Mitchell, former frontman of sleaze legends Circus Of Power. With vocal chords that sound like the exhaust of a well-tuned Harley motorcycle, Mitchell and company have released another eclectic collection, one that has much in common with the great Circus Of Power while retaining a sound all its own.

You know, the more I listen to Pure American Muscle Baby I can’t help but think this is what Jim Morrison would have sounded like if he hadn’t passed away (or is he still alive?) in that bathtub so many years ago. On many tracks Mitchell sounds like a dead ringer for Morrison, just check out the haunting “Man On The Hill” or “Secret Love” for proof. But don’t get worried here, although there are some mellow moments, there are also full-throttle rockers. “Dance Little Suzy” for instance (and to a lesser extent “Ninety-Nine Pounds Of Soul”) is a supercharged rocker with a wall of guitars attacking from all sides while “Hot Lottie” adds a southern swagger to some of the gruffest vocals laid to disc in years.

The sludge oozes out on “Children Of The Midnight Sun”, creating a dark aura that suits the song title perfectly. “American Monster” and “Sweet Judy Brown” are a couple of high adrenaline rockers found on Pure American Muscle Baby. Another song that can’t be overlooked is the country leaning “Lonely, Fucked Up And Blue” which would make a great drinking song for those sitting home alone wallowing in their sorrows.

Just like UMCB, the booklet isn’t anything to write home about – but it is the music that counts right? And the music here is well worth the price of admission. It covers many different styles, but manages to remain cohesive – and Alex‘s gritty, greasy, guttural growl should be the blueprint for every sleaze band. This dirty little gem can be found at either www.fatnancy.com or www.cdbaby.com.