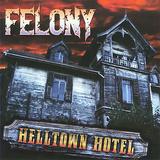 Review:
Felony was born out of the 80s, coming together in 1989 when glam/hair metal was in full swing. Now they are back, or at least finally getting their music out to the public thanks to Eonian Records – although there is talk of the band recording brand new material as well.

I thought that Helltown Hotel was going to be a pretty easy CD to review, because it sounds exactly like Motley Crue. Early Crue to be precise, before the major label money came pouring in thus allowing the Motley ones to enter a proper studio. That is what hurts Helltown Hotel, a lackluster production and tinny sounding mix. Although considering Felony was an unknown band and that these songs were recorded between 1990 and 1993, I’m able to forgive them for the quality of the recordings. The first four songs though, with “Heist In Helltown” being the highlight, just scream Motley Crue demo, mainly because Tommy Lee Lords sounds identical to Vince Neil.

That was 1990 though, by 1993 Felony was altering their sound ever so slightly, beginning to get a bit darker and edgier. Sure it was still sleazy hard rock, not unlike that of Spread Eagle, but still nothing very unique. The band does stumble across a gem now again during this time though, like the hard-hitting “Yank That Chain”. That’s the thing you have to like about Felony and bands of their ilk – they tried – and while they didn’t offer anything original enough to make them stars, they delivered fun and hard rocking music. I have to give them credit for that. Oddly enough, one of the best tracks on this CD, “Mississippi Rollin”, appears in demo form and represents the band at the height of their creativity…that was 1991.

Aside from the sound quality itself there honestly isn’t a thing wrong with Helltown Hotel, it just sounds a bit dated is all. Felony had the musicianship, could write the songs, and had the look…what they didn’t have was the right timing. There are no surprises here, so if you like this type of music you’ll know exactly what you expect – if that is good or bad is up to you.