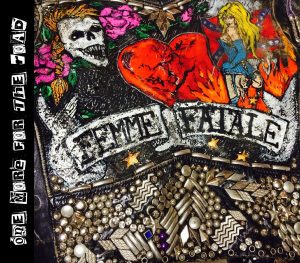 Review:
It’s hard to believe that Femme Fatale‘s frontwoman Lorraine Lewis hung on to demos for 25 years before finding the right time and label (FnA Records) to release them. In a way, it’s a shame that the demos were not released sooner as we might have had another version of Femme Fatale a lot sooner. Then again, it’s great that these demos have finally been released because they simply kick ass!

Recorded as the demos for Femme Fatale‘s follow up album Lady In Waiting, the songs never got to see the light of day for various reasons including that the group’s label MCA was cleaning house and apparently not behind the band anymore, Lewis was getting enticed to go solo, and the band’s long-time co-manager Andrea Accardo was battling cancer. The long and short story is that the new Femme Fatale album One More For The Road (a change in the album title was eventually made) was apparently recorded in one day “live” in the studio with warts and all. If you’re expecting a nice polished follow up to Femme Fatale‘s self-titled debut album, you will be disappointed. If you’re up for raw, exciting and energized renditions of some heavier songs that will take you back to the best days of the Sunset Strip, One More For The Road is a must for your collection.

I must confess never being a Femme Fatale fan back in the day and finding their songs a bit too much on the poppy side when I finally really listened to them a few years back. However, Femme Fatale had me intrigued about their long lost album when I heard the song “Lady In Waiting” at the M3 Rock Festival back on April 26, 2014 because that track rocked and was heavier than the rest of the songs that I heard from the band that day. I will also confess that I was concerned when I saw that there were 14 songs on One More For The Road since I thought the band would surely have some filler tracks on the record with so many tracks. Let me tell you. Every song on One More For The Road is a good one with some being great ones. Many of the songs have an old school Van Halen feel to them such as “The Alley” and the beginning of “Sacred Bible.” There’s a real energy that can be felt as the Femme Fatale band members played one song after another in their rehearsal studio without worrying about fixing any mistakes. According to the album booklet (which is awesome and filled with tons of info including Lewis discussing each track), the only thing that seems to have been added after the songs were recorded were the background vocals.

What you really end up getting is sort of a Femme Fatale live album full of new heavier material — and that is a great thing! The lead guitar work from the late Bill D’Angelo really rocks and Lewis‘ voice is sexy, powerful yet a bit on the raw side. My favorite tracks on One More For The Road are “Lady in Waiting” with its very ’80s sounding intro guitar riff, “The Alley” with its bluesy guitar riffs and “na-na-na-na” parts, the intro track “Don’t Mean Nothin'” and “Ain’t Nothing Betta” which reminds me of Sammy Hagar era Van Halen at times. Although I have already stated that all the songs are good ones, two I could have lived without are the cover of Janis Joplin‘s overplayed “Piece Of My Heart” (I’ve also never been a big fan of Janis Joplin) and the last track “Lost Generation” which occasionally lacks some punch. I have to think that the band would have likely withered down the 14 tracks to only ten for their sophomore effort Lady In Waiting back in the day. In any case, I can understand why Lewis would include fourteen tracks without presumably omitting any more than 25 years later.

While One More For The Road is a very enjoyable album and a great blast from the past song wise, one has to wonder just how good that those songs would have sounded with a little more production and polish. We’ll never know but I hope that the release of One More For The Road will push Lewis to release some new material with her current all female line-up of Femme Fatale. I suspect that I won’t have to wait 25 years for that to happen!

Femme Fatale playing “One More For The Road” live at Vamps in Las Vegas, Nevada, USA in 2015:

Femme Fatale One More For The Road

Femme Fatale One More For The Road @Vamps las vegas 2015