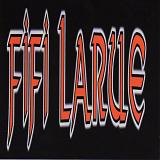 Review:
You may be thinking, Fifi Larue is the name of a rock singer? As funny as it sounds, it is true – but then again how weird would the name Alice Cooper have sounded to people in the early 70s? And it is obvious that Fifi Larue is heavily influenced by Alice Cooper and Kiss, for proof just check out his ‘demented clown’ appearance.

Not only has Kiss influenced his appearance, but Fifi Larue also sings a lot like Ace Frehley. Not only do the two sound alike, but Fifi also has that laid-back nonchalant vocal delivery. Another thing Fifi Larue has is a warped mind, as this CD takes several odd twists and turns, heavily drenched in horror and sexual content (“Mannequin Love” anyone?). It all makes for an interesting and odd listen.

The disc kicks off with female screams and laughter as Fifi storms into a W.A.S.P. induced frenzy on “Welcome To My Flyin’ Circus”. It’s not shocking how much this killer opening track sounds like W.A.S.P. considering Chris Holmes handles all the guitar duties on it. And he isn’t the only name musician appearing here, several rock stars lend a helping hand, including several from Alice Cooper‘s solo band. Fifi Larue keeps things up-tempo for other cool tracks like “Kiss To Kill”, “Killer Bitch”, “Dance With The Devil” and “Baby Killers”.

This strange musician also mixes things up with a couple off-the-wall ballads in “So Blue Without You” and “Brandi”. He also turns The Doors‘ “People Are Strange” into a half-assed carnival song and then turns around and does John Lennon‘s “Imagine” justice.