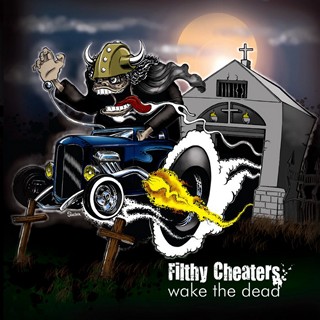 Review:
I wanted to like this CD, I really did, as everything about it looked promising. The band name for one is great, and the album artwork hinted that something special would be contained within. And there is nothing wrong with being Nashville Pussy copycats, but Wake The Dead is a case of horrible production making an album damn near unlistenable.

As hard as I tried to give the Filthy Cheaters the benefit of the doubt on their independent debut offering, the muddy production values and amateurish songwriting abilities made this a tough one to get all the way through. The drum sound has no depth at all so it’s like listening to someone pound away on garbage can lids, meanwhile the guitar work is completely drowned out. Adding to the problems is singer/guitarist Johnny T who sneers his way through each song, 14 of them to be exact, all of which are played with the same reckless abandon and thus become interchangeable.

The only track that differentiates itself from the others is “Women I Don’t Know”, which could be mistaken for an early American Dog outtake. But it doesn’t take long for the Minneapolis, Minnesota natives to get sucked into the same old rut on the following number “Maximum Destruction” — a rut they doggedly follow until the bitter, and welcome, end.

Caught somewhere between sleaze and punk, the Filthy Cheaters come across as a one trick pony, unable to offer anything other than full-speed ahead rock. Perhaps they are true punks and wanted this DIY sound, but with zero tempo changes this entire disc sounds like it keeps skipping after the first song. I honestly couldn’t tell one track from the next, and by the end if the CD I no longer gave a damn. Sorry guys, despite the cool band name and fancy album artwork one key ingredient is missing — listenable songs!

Buy The CD:
Purchase at Facebook.com