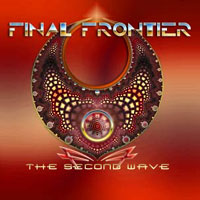 Review:
I must admit that it took me a few listens to get into this album, but it wasn’t long before the huge melodies and outstanding musicianship sucked me in. I kept wondering to myself, “is this what Chicago would have sounded like if they played bombastic melodic metal?” Now that may not sound very appetizing, but it makes for better music then one would expect. Fans of bands such as Journey should eat up this release featuring Von Groove‘s Mladen Haze.

The Second Wave bounces between keyboard laced rockers and melodic mid-tempo numbers, but what every song has in common is the huge vocal harmonies — you just can’t help but sing along. My favorite songs are ones in which the guitars and keyboards dual each other, creating a massive wall of sound. Some of the best include “The Second Wave”, “Runaway”, “Faithful Heart” and “Lydia”. “After The Fall” is an incredible slower number; Rob Moratti may have a voice that won’t suit everyone’s tastes, but it in incredible.

Final Frontier would have fit in nicely with the 80s arena rock craze, but those days are over and sadly music like this is all but ignored. But regardless of whether people will hear this album or not, it is a great release (and one of the few in which there is no borderline songs included) that will take the listener back to a better musical era. Final frontier can be found at www.finalfrontiermusic.com.