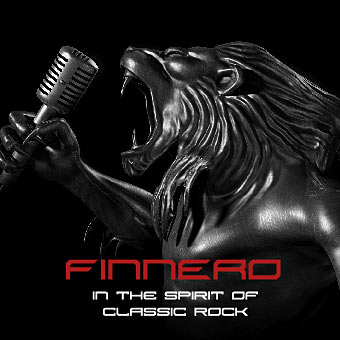 FINNERO
IN THE SPIRIT OF CLASSIC ROCK
Released 2006 (Infant Records)

Review:
A rocky and uncertain start in rock and roll can sometimes lead to great things, such as it did for Finnero. Vocalist Finn-Ero Bustadmo first attempts at rock and roll were failed garage bands that lead him straight into a path where rock and roll was present and would be his future. His time being in a tribute band for Deep Purple created the right enthusiasm for his solo projects and the momentum to keep Finnero going and working toward the ultimate title of rock and roll icon!

Finnero‘s music is just as the album title claims, In The Spirit Of Classic Rock. Every song on the album could be songs that you would hear in a stadium filled with 30,000 screaming rock fans. With influences apparent in Deep Purple, the music is nothing but classic and truly filled with the passion and love that is missing from a lot of rock today.

Songs like “Behind” and “Street Legal” are catchy and have a sound that very well could be considered part of the 80’s music scene and brings back the sound that was captured during the era. All the songs on the album are strong in content and are very powerful, both the vocals as well as the music that brings the vocals to the forefront. The album is not an album that will be forgotten, the talent and the true classic sound is a sound that will be around for years to come.