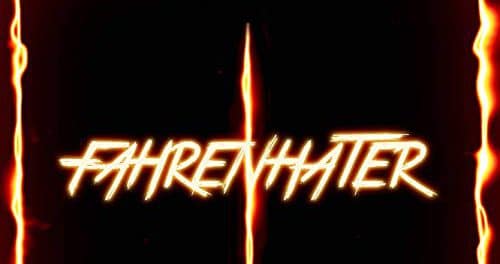 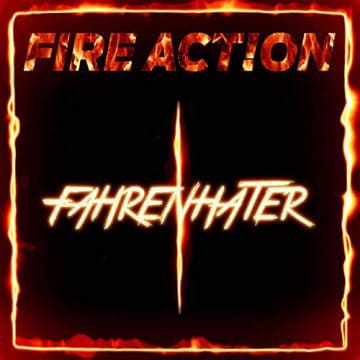 Review:
It’s always difficult changing lead vocalists and that is exactly what has happened to Finnish rockers Fire Action as their new EP Fahrenhater features a new singer by the name of Gary J. James, which really seems to have changed the band’s overall sound. Back in September 2016, I reviewed Fire Action‘s three-song EP Rock Brigade and thought that the guys mastered the ’80s sound quite well. Fire Action‘s singer at the time — Leo Barzola — had a grittier and more screaming type of delivery, which kind of shaped the band’s sound.

Although all of the same players are there (except Barzola) for Fire Action‘s new EP Fahrenhater — guitarist Juri Vuortama, bassist Jani Hongisto, drummer Samuli Häkkilä and producer Panu Pentikäinen — Fire Action almost sound like a brand new band with their new lead vocalist Gary J. James. The sound is still definitely reminiscent of the classic ’80s hair metal era but it’s a lot different than what could be found on Rock Brigade. I confess that I haven’t heard the entire Rock Brigade EP since reviewing it but listening to the title track and “Lady In The Dark” again, there is no question that the addition of James has made a huge difference to Fire Action‘s overall sound.

While Barzola gave Fire Action a gritty feel, James gives the songs more of an European ’80s feel with his calculated and paced singing. I confess that I must have heard Fire Action‘s Fahrenhater EP over 40 times as each time that I think I’m going to review it, I am not really sure what to say. All four tracks are enjoyable yet at the same time, nothing really stands out. I think part of the charm of the songs but also what holds them back a little bit is that they are all played at mid-tempo pace even though it feels like each song could be played at a faster pace. The opening track “In The Face of Evil” starts off with a very familiar Dokken sounding start (I can’t seem to identify the Dokken song though) before kicking in with what seems like some really cool guitar harmonies (although there is only one guitarist) and James‘ European accented lead vocals. “Shadowstone” doesn’t blow you away but will definitely grow on you. The track has some good melodies and the chorus portion is rather slower paced but enjoyable. Vuortama delivers a cool guitar solo with lots of melodies that will remind you of Europe‘s Kee Marcello or Dokken‘s George Lynch. The title track picks up the pace a little bit and features some cool guitar soloing from Vuortama. Perhaps the most interesting track is “Spanish Bars” which to the band’s credit has a real Spanish flair to it and some nice melodies.

I’ve always loved classic ’80s metal with some European laced singing, which is the reason why I am enjoying Fire Action‘s Fahrenhater EP so much. The songs on Fahrenhater are definitely more mature sounding, more melodic and better constructed than the ones on Rock Brigade. None of the songs really blow me away but I also never shut it off once I start playing it. It’s a solid slice of European hard rock that reminds me of early Europe without Joey Tempest‘s vocals.

Fire Action‘s “In The Face of Evil” video:

FIRE ACTION – In The Face of Evil

Music and lyrics by Paul OxleyVideo directed by Panu Pentikäinen