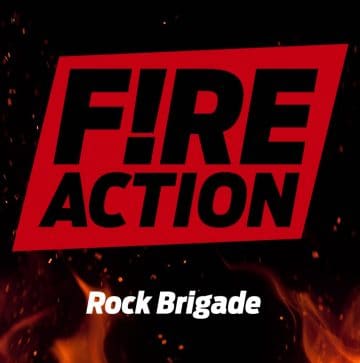 Fire Action‘s debut EP Rock Brigade is a very pleasant blast of the past and a return to the glory days of ’80s heavy metal where half the kids in a high school could be seen wearing rock concert t-shirts at school after their favorite band had come to town the night before.

There’s nothing complicated about the songs on Rock Brigade. It’s just kick ass ’80s sounding hard rock / heavy metal from the simple song structures to the guitar tone to the beautiful guitar solo / melodies (check out “Rock Brigade”) to the screaming type singing at times. Even Fire Action‘s song titles borrow heavily from the ’80s with “Runaways” being so close to Bon Jovi‘s “Runaway”, “Lady In The Dark” reminding me of White Lion‘s “Lady Of The Valley” title or Iron Maiden‘s “Fear Of The Dark”, and “Rock Brigade” having the same title as Def Leppard‘s song released back in 1980.

Even though all three tracks on Fire Action‘s Rock Brigade EP have that ’80s feel to them, they all sound a bit different style wise. My favorite is the last track “Rock Brigade” which sounds a lot like a track that would have been on Accept‘s Balls To The Wall album with its opening guitar riff and overall feel minus the vocals of course. That song would be just about perfect if it wasn’t for the odd ill fitting song slow down portion after the guitar solo. Interestingly, Fire Action have released a video for my least favorite track on the Rock Brigade EP — “Lady In The Dark.” It’s not that the track is a bad one but the other two feel heavier and more riff based. Although I like all the songs on the Rock Brigade EP, the one drawback is that I find that there is no real standout track head above the shoulders from the other tracks or that elusive anthem.

Overall, Fire Action have delivered an exciting EP that will no doubt conjure flashbacks to the ’80s glory days for anyone who had the pleasure of discovering / listening to heavy metal during that golden period. Judging by Fire Action‘s latest song “Highway Patrol Man” which was released subsequent to the Rock Brigade EP, the Finnish group’s next (hopefully) album sounds very promising!

FIRE ACTION – Lady in the Dark