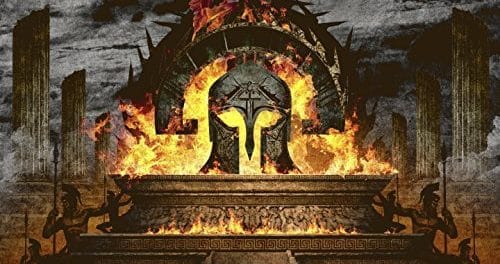 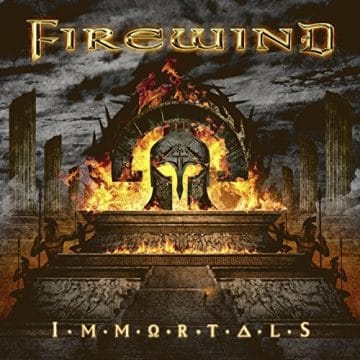 Review:
Firewind‘s new studio album Immortals marks the first high-profile power metal release of 2017. Band leader and axeman extraordinaire Gus G has gained a lot of fame in the genre since 2009 when it was announced he was to replace Zakk Wylde as string-man for none other than Ozzy Osbourne.

The one big change in Immortals is that the very talented Apollo Papathanasio gets replaced with ex-Metalium singer Henning Basse. When I first heard of this change, I became quite upset. Despite Papathanasio‘s recent solo effort Waterdevils being quite weak, I consider him a very good singer and have enjoyed his work with Firewind in the past, especially on The Premonition. Add that to the fact that I never truly liked any Metalium album, nor particularly think of Basse as a stand-out singer of the genre, my expectations for Immortals were below average.

Well, I’m happy to say that my fears were unfounded for Basse gives the performance of his career on Immortals. Don’t get me wrong, he’s still no Papathanasio, but he’s never sounded better, or displayed a wider range, than on Immortals. Of course, having Gus G‘s crazy virtuoso solos and riffs along for the ride doesn’t hurt either. He’s among the best guitar players in power metal and knows perfectly how to display prowess while maintaining things catchy and melodic.

Another point in favor for Immortals is that Firewind teams up, for the first time, with Dennis Ward who produces the album and helped Gus G to write the songs. Ward has been behind some pretty great albums in the past, the subject of the lyrics cover familiar territory for anyone who’s seen the film 300: the Battles of Thermopylae and Salamis in 480 BC during the second Persian invasion of Greece.

So, what does all this means for the music inside Immortals? Euro power metal all the way, in the traditional Firewind style. Epic, full of riffage, bombastic, uplifting, galloping, and melodic with lots of guitars and keyboards duels. Think Stratovarius, Edguy, and Masterplan. Lots of anthem-like songs with strong choruses. The first single “Ode to Leonidas” is a perfect sample of what you’re getting here.

The last and very important strength of Immortals — one which many, many bands don’t seem to grasp — is its length. At a perfect 45 minutes packaged into ten songs, the album feels immediate and doesn’t overstay its welcome.

In the end, although I wasn’t expecting much from Firewind‘s new album, I found myself enjoying listening to it a lot, often banging my head to its tunes. For this, and its other good points, I can easily name Immortals the first truly enjoyable (there aren’t that many these days) power metal release of the year.

Firewind‘s “Back On The Throne” lyric video:

FIREWIND – Back On The Throne (Lyric Video)

FIREWIND – Back On The Throne (Lyric Video). Taken from the album “Immortals” out now!”Immortals” can be purchased here: CM Distro: http://smarturl.it/FIREWI…