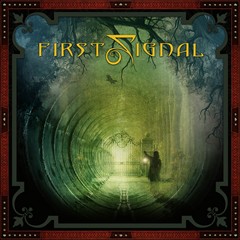 Review:
Well, well, well… If you would have told me that an album would be released in 2010 that would flash me back to the glory does of junior high school and give me the kind of goose bumpidy feeling of my first kiss or the butterfly’s of my first day of school, I would have laughed until I spit milk outta my nose (if I wasn’t lactose intolerant).

The album in question is the debut release from First Signal, a group of seasoned musicians led by none other than Harry Hess of Harem Scarem fame. His voice is not showing any signs of wear after all these years, and backed up by a slew of top shelved seasoned veterans and co-writers/musicians sharing the tasks of making the album, have created what may be considered album of the year.

I am not going to dwell on where everyone came from, or how this release was better than that release (this has been battled over and discussed ad nauseum online daily for years), what will get brought forth here is the fact that this album is fantastic! From the first note of “This City” (which is a truly phenomenal cut and will certainly set you up for what’s to follow) to the fade out on “Naked Desire” you will not believe your ears… No kidding! There is no sense dwelling on this one… simply buy, buy, buy.

If you enjoy melodic AOR then you will not want to miss out on First Signal‘s debut. There isn’t a piece of filler here, this album is as classically solid throughout as Boston‘s self-titled, AC/DC‘s Highway To Hell or Def Leppard‘s High N Dry…. it is simply superb and rivals Harem Scarem‘s best work!