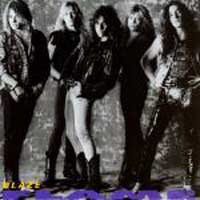 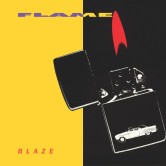 Review:
Z Records has managed to resurrect another impossible to find late 80s treat, repackaged it and made it available for some of us who may have missed Flame the first time around. You know the drill — melodic hair metal with memorable guitar solos, mixing it up between rock songs and ballads — and while Blaze isn’t breaking any new ground, it does deliver the goods.

Blaze kicks off with two songs that are reminiscent of Saraya, even down to the vocals as Phillip Andrew sometimes has a gritty feminine sound going on. Some of the best songs include the straight-ahead rocker “Lorelei” and “Ball & Chain” with it’s extended intro that morphs into Dokken territory. Ballad hungry females were likely all over “New Love” and “Bound N’ Tied” during the band’s heyday. “Get It All” is a pop-metal tune that has an irresistible chorus that would feel at home on a Danger Danger release. “Freight Train”, with its gritty vocals over a chugging guitar, is possibly the best song on the disc.

Well-polished radio friendly hair metal — they don’t make them like this anymore. Fans of bands such as Bon Jovi, Danger Danger and Cry Wolf should enjoy this revived gem.