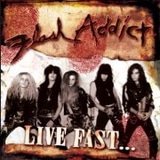 Review:
I am humbled at the amount of amazingly talented and virtually unknown (outside their hometowns) bands that are out there. With the resurgence of 80’s fueled hard rock and a litany of good, bad and ugly labels scrambling to re-issue anything and anyone with hair, Boston’s Flash Addict certainly churn out a respectable disc of high energy, stellar musicianship and bravado that should have made them a household name back in 1992. Unfortunately in the early 90’s the American populace decided to grasp hold of a musical style, and I use the word style loosely, and turn their collective backs on all things good, all things hair metal!

Fortunately for us fanboys (and girls) labels like Suncity have shown their passion for quality hard rock bands of the 80’s and 90’s and released Flash Addict‘s Live Fast…Die Pretty. From the opening track “Taste Of The Grave” through “Angeldust Suicide” to the final number “One Way To Hell” Flash Addict slams down the throttle and never let’s up! This high octane ride on the razors edge is full of sleaze rock and hair metal influences from all your favorites including L.A. Guns, Spread Eagle, Bang Tango, Skid Row, Motley Crue, etc. I don’t mean later incarnations of these great bands when they lost their way, I’m talking about their first releases when they were still hungry. When they still had something they believed was worth fighting for.

Simply put, Flash Addict is/was a great band and I am now a fan and wished they had some more releases or were from Seattle so I could have hung out with them and appreciated their great music first hand. Thanks guys for a great hard rock/hair metal record and thanks to Dave at Suncity for giving us the opportunity to appreciate them.

Of note: this re-issue is dedicated with loving memory to guitarist Alan Hutcheson (A.K.A. Damien “Crash” Alchemist) who tragically died of a brain aneurysm in 1999. RIP

Reviewed by Terry for Sleaze Roxx, May 2009.