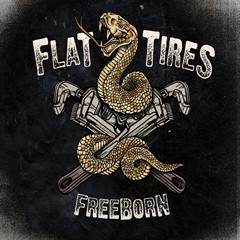 Review:
John Boorman’s 1972 film Deliverance is a stone cold classic — a tale of friends getting into trouble in America’s hicksville backwaters. I can’t help feeling that the movie would be improved upon if the Flat Tires supplied the soundtrack. Imagine that funny lookin’ kid with a Gibson Les Paul instead of his dueling banjo.

The Flat Tires are new to me, but they’ve been around for a little while now, kicking up a shitstorm in every redneck bar that’ll have ’em. No messing around, two minute punk n roll songs delivered with a bluegrass twist and fuelled by a quart of moonshine, Freeborn is an album to kick you in the pants if yer wanting something different from yer usual run of the mill hard rock. If Chuck Berry had hooked up with Dee Dee Ramone and snorted a shitload of Peru’s finest instead of playing with his ‘Ding A Ling’ then that pairing would have undoubtedly come up with a record uncannily similar to this.

Kicking off with “GD Woman” and winding up with “Rock & Roll Weekend” there is no time for a breather and you can almost smell the sweaty dungarees (no spandex here people), sleeveless flannel shirts and trucker caps. Songs like “Crybaby” and “Carolina Shitstomp” are very definitely in the Dee Dee Ramone vein (“Wart Hog” and “Love Kills” in particular) whilst “Two Of Three Things” is The Georgia Satellites through and through, only played on 45 instead of 33rpm.

The first half of Freeborn consists of studio cuts, whilst side B if you like, is made up of assorted live tracks and it’s live where I can imagine the Flat Tires really make sense. This is good old fashioned, alcohol-fuelled rock ‘n’ roll in its rawest form, no frills, no apologies (and no soap) and I like it a lot. “Lucifer” is probably the most accessible song here and could have come straight out of The Georgia Satellites‘ Open All Night sessions — proper blues boogie this one is.

I love this record from top to bottom — it’s rough, ready and makes you stamp yer foot. What else do you want from an album? Say boy, you got a purty mouth….