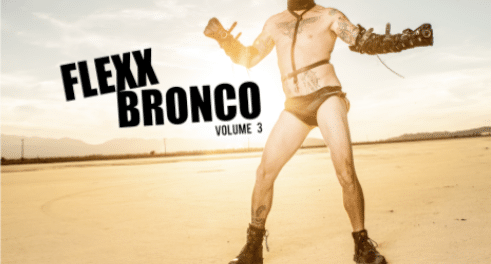 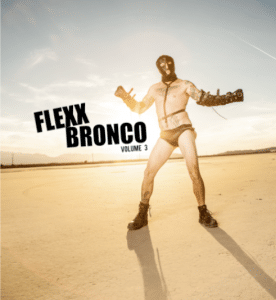 Review:
Balls out rock and roll — Flexx Bronco are pretty much that, and not much more. The four piece from San Francisco is flat out rock. No red lights, no pedestrians, no cute little puppies to get in the way.

There are many comparisons I could make… combining Gypsy Pistoleros with Motörhead, or Circus of Power with Eagles of Death Metal. It’s all really up to how you perceive them, song by song. There’s even what I consider an homage to fat Elvis. For example “Vallejo” is Southern rock infused with a bit of Mexican flavour, like the Gypsy Pistoleros. The original version of “Heart On The Floor” is fat Elvis time. “Nightmare” is the drunk boyfriend’s worst dream.

“Blondetourage” is solid heavy rock. The band apparently found a new thing. “Filthy’s Lullaby” to me is very Eagles of Death Metal, relying on a pure drum and guitar sound, whereas I hear strains of Circus of Power in “Deadman.” “Big Sky Fire” is Motörhead without the distortion. And finally back to fat Elvis. Flexx Bronco decided to do two versions of “Heart On The Floor” — one with a pure guitar sound (the original version) and one which is heavier and more punk riffing (the alternate version) — the latter being an interesting rework of the original.

Flexx Bronco will never win awards for their lyrics with stuff such as “If you see my heart lying on the floor, snatch it up so it don’t get stepped on no more…” but who cares? This is a party band with a sense of humour and a party rock sound. So many bands these days take themselves way too seriously. Flexx Bronco are clearly not one of them. They have fun with their music and expect the audience to come along for the ride. These guys are just too hard to define — try for yourself.

Heart On the Floor

Provided to YouTube by CDBabyHeart On the Floor · Flexx BroncoVol. 3℗ 2015 Flexx BroncoReleased on: 2015-11-27Auto-generated by YouTube.