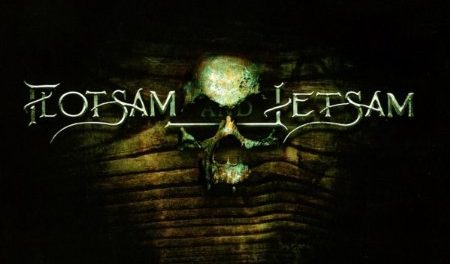 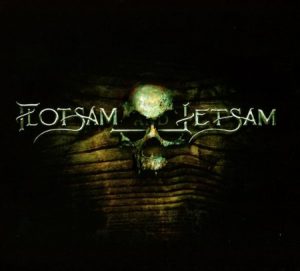 Review:
I was first exposed to Flotsam And Jetsam in 1992 when they released the single “Wading Through The Darkness” from the album Cuatro. After seeing that video on MTV (when they actually played music videos) Headbanger’s Ball, I went out and purchased that album. I still enjoy that album to this day and with their next release, Drift (my favorite album of theirs), I picked that one up once it was released. It has always been my habit that once I find a band that I like, I will buy their past albums so I can have everything they released. For some strange reason, Flotsam And Jetsam were one of the bands I did not go past Cuatro. I also stopped following them after Drift. I have no reason as to why I did that, and I wish I would not have because after this self-titled release, I will now have to get all their albums.

Most metal fans know that Jason Newsted helped form Flotsam And Jetsam in Phoenix, Arizona, USA in the early ’80s. He did lay bass on their first album Doomsday For The Deceiver before quitting the band to join Metallica. I know this has helped put Flotsam And Jetsam on the map, but I hope most people will be able to look beyond that and see that this band does kick some serious ass and has been putting out some serious metal for over 30 years. Since Newsted’s departure, Flotsam And Jetsam have had many line-up changes. So many so, that one might need a diagram to follow because some members have left and came back. The one standing member to last the whole time since their first release is singer Eric AK. Along with Eric AK, the current line-up consists of Mike Gilbert and Steve Conley on guitar, Michael Spencer on bass, and Jason Bittner on drums. Metal enthusiasts will recognize Bittner’s name as he was the drummer for Shadows Fall.

It has taken 30 years for Flotsam And Jetsam to have a self-titled album. I do feel that now is a good time, as this album is a “rebirth” of some sorts for them. There is new aggression, thrash, and raw energy that has been brought to life from new drummer Bittner. It is like with his addition, Flotsam And Jetsam are ready to start a new path down the road they have been on for a long time.

“Seventh Seal” is a great song to kick start the album. It has the old thrashy element of Flotsam And Jetsam that some fans have been missing for some time. As soon as you hear Eric AK’s voice, you know this is a Flotsam & Jetsam album. He has one of those distinct voices that once you hear it, you know who it is. He is truly the “voice” of Flotsam And Jetsam and if he was to ever be replaced, the band would have to change its name.

The song that is gaining the most popularity off this album is “Iron Maiden,” which has over 107,000 views on YouTube.com alone. It is also close to 14,000 plays on Spotify. This song is homage to one of their favorite bands, Iron Maiden. The lyrics focus on the torture device iron maiden, and not the band. The music if very similar to their idols: the racing duel guitars in the beginning, fast double bass drumming, and the chanting chorus.

This is a fantastic album from start to finish. I found myself listening to the whole thing, on average, two to three times a week since I have downloaded it. Other standout tracks are the heavy and bouncy “Creeper,” the fast and furious “Monkey Wrench” and “Life Is a Mess,” the firing “Smoking Gun,” and closer “Forbidden Territories.” This album has everything for all the different type of metal fans, whether it be speed metal, thrash metal, heavy metal, and all things metal! This album is perfect for someone to discover or re-discover who is Flotsam And Jetsam.

FLOTSAM AND JETSAM – Iron Maiden (2016) // official lyric video // AFM RecordsThe song is taken from the album “Flotsam and Jetsam”, to be released on May 20…