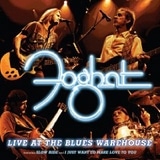 Review:
If you’ve been keeping track it wasn’t but two years ago that the current incarnation of Foghat issued their second live album entitled Live II. Well, here we are in 2009 and Foghat have issued yet another album, Live At The Blues Warehouse however is slightly different as it has a ‘King Biscuit Flower Hour’ type vibe. The reason being is that this CD is a live radio performance taped live in the studio at ‘The Long Island Blues Warehouse’ radio show.

The renditions of the classics on this recording show off a revitalized band that still has the best interests of the band’s legacy. In addition to classics which include “Fool For The City”, “Drivin’ Wheel”, and “Slow Ride” we are treated to a rare treat; an interview with band founder and drummer Roger Earl as well as the rest of the current members. The tracks are on the front end and the interview portion is on the tail end, and it’s clear that the interview took place throughout the performance. The editing is a bit crude but the content more than makes up for that.

If you’re a Foghat diehard you’ll snatch this one up in a second, and if you’re a novice this will share some of the band’s history while giving you a brief hits package to boot.