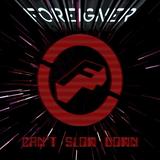 Review:
It’s ironic that Foreigner reformed as a result of Jason Bonham urging Mick Jones to get back together and the drummer is no longer in the group. He does however appear on one track on Can’t Slow Down called “Too Late”, which also appeared on last year’s hits collection.

I really like the way that Mick Jones went about putting together the new lineup, it’s reminiscent of the way David Coverdale put together Whitesnake to tour behind the self titled album. He brought in talented, seasoned players, with great reputations and an existing fan base. Important additions to this version of Foreigner are Jeff Pilson on bass, who has played with Dokken in the past, drummer Brian Tichey who replaced Bonham and has played with Zakk Wylde and Billy Idol to name a few, and the biggest addition is vocalist Kelly Hansen who replaced Lou Gramm who many deemed irreplaceable. Hansen has sung for Hurricane, Unruly Child, and has done more tribute albums than Jani Lane.

Sure the line-up sounds great in print, but the real proof would be when they hit the studio for a full length album. The wait is over and the end result is Can’t Slow Down. I can’t begin to tell you how fantastic this album is from beginning to end. There aren’t any four on the floor rockers on here, instead the band concentrated on writing mid-tempo AOR tracks and killer ballads. While I’m not a huge ballads guy these songs are so well crafted that they’ll hook you in and that’s all she wrote. Kelley Hansen proves to be Foreigner‘s MVP as he brings back shades of Gramm, but with an edgier vocal on the new material.

It’s hard to pick just a few standouts on Can’t Slow Down because this is a solid, well executed effort from top to bottom. I’d have to say the best are “Can’t Slow Down,” a great opener that sets up the rest of the album nicely and proves to be a great way to introduce Hansen to those that hadn’t heard him before, “In Pieces” with its great melody and chorus, the fantastic and very memorable “I’ll Be Home Tonight” (make sure to refuel your Zippo for this one if it makes the set list), “Too Late”, the hardest hitting track on this album due to Jason Bonham‘s drumming and the R&B influenced “Fool For You Anyway,” which you’d swear is a Smokey Robinson cover…but it’s not.