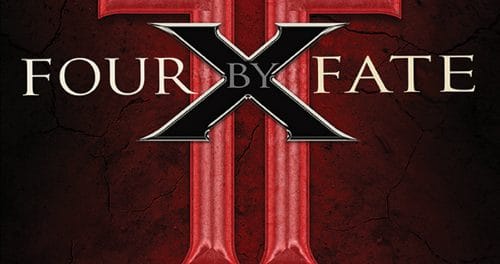 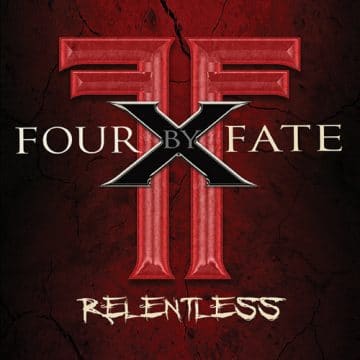 Review:
In the last few years, there have been many so called super group releases. I myself can attest to the fact that I have purchased a few of these such releases. The end result upon my initial listen has usually been met with discontent. Generally, I find these releases to be uninspiring. It almost seems as if these bands have been thrown together just to sell product purely on the names of the musicians that are on them. “All meat and no potatoes” is the term I associate this to.

So, as it stands now, I am very careful to do research on these bands before I make my purchase. YouTube for me is my main tool for doing such research. I try and play as many tracks from the album that I can get my hands on before making the decision to buy.

When it came to investigating and investing in Four By Fate‘s debut album, this is exactly what I did. I had initially heard about Four By Fate about a year ago, but then soon forgot about them. I guess you could say that in my mind, they got lost in the shuffle. Being a fan of the website Three Sides Of A Coin, which is a site strictly devoted to anything KISS related, I stumbled upon an interview with former Frehley’s Comet and current Four By Fate bassist John Regan. I thoroughly enjoyed listening to what Regan had to say. It was very in-depth about the rise and demise of Frehley’s Comet. Regan dived into subjects about bad business decisions in terms of Frehley’s Comet made by the executives at Megaforce Records, the band’s fantastic debut, the Live + 1 EP, Second Sighting, Trouble Walkin’ and why Frehley’s Comet has not reunited. Regan didn’t hold anything back. He was honest and it caught my attention.

At this point, I started doing a little more research on Four By Fate. A couple of days after listening to the Regan interview, I came upon an interview done by Mitch Lafon with former Skid Row and current Four By Fate drummer Rob Affuso. Again, it was very in depth about the trials and tribulations of music from Affuso‘s recollection. That’s when I really started to dive into the band’s music. I went on YouTube and found many live performances of the band doing classic Frehley’s Comet material. Of course, the band not only includes Regan and Affuso, but former Frehley’s Comet guitarist/vocalist Tod Howarth. The group also features guitarist Pat Gasperini.

When I had finally listened to every last track of live stuff available to me, I then started getting into the tracks on the band’s 2016 debut release Relentless. I was taken back by the music and decided to make my purchase on Amazon. To my amazement, it was available for $7.99 plus shipping, which to me was very reasonable. Thank you Amazon! Within days of my purchase, it arrived via Canada Post. It was a busy evening so it would not see the light of day until my time permitted. That would come the next day.

The first track off Relentless is a cover of John Waite’s “These Times Are Hard For Lovers” which was written by Waite and ’90s songwriting genius Desmond Child. I can honestly admit this is a song I had never heard before, but instantly I fell in love with this track. Melodically, this song hits me right between the eyes. The chorus is infectious and I find myself singing along to the catchy chorus. I find the vocals of Howarth to be different and less high than that from his Frehley’s Comet days. Track two — “Moonshine” — is the first composition written by guitarist Pat Gasperini. It starts instantly and I find the groove to be foot tapping. When I was checking the band out on YouTube, this was the song that I kept gravitating back too. Great bluesy guitar riff underneath the ferocious drum attack of Affuso. I always enjoyed the creativity of Affuso’s drumming, especially on the debut Skid Row album. Some drummers are distinctly obvious and others are unnoticeable. Affuso falls into the category of distinctly obvious. And I have to admit upon hearing Affuso play, for the life of me I can’t figure out why he’s not back playing with Skid Row, but that’s not my call and hopefully one day there will be a reunion of the five original Skid Row members.

“Hangin’ On” is another Gasperini composition and keeps things flowing nicely. The track starts with a guitar rhythm and hits on the snare drum. Gasperini’s vocals sound precise and smooth. The guitar line grooves the whole song. Of course Affuso’s drumming stands out. Bassist John Regan keeps everything in the pocket and there is a great breakdown in the middle of the song with a slow build off of Gasperini’s vocal line. “Levee Breach” is the first track on the album to feature the drum talents of the late AJ Pero. Pero’s power is felt throughout this song as he starts the song off. This is the first Howarth written track on the album and it is very reminiscent of Velvet Revolver. The guitar groove is very much Slash orientated. Even the vocal intro reminds me of Scott Weiland. Very powerful song and great chorus.

For those familiar with the Frehley’s Comet catalog, the next track will be a nice surprise. Four By Fate have done a great job of rehashing “It’s Over Now” from the Second Sighting album. I find the vocals of Howarth to be slighter different from the original and the song seems as though it may be tuned down to give the song more of a modern feel. The guitar is heavier in the back and the chording sounds as though it may be in Drop D. Overall, this Howarth composition sounds fantastic and fresh. The song still possesses a keyboard heavy sound and Howarth’s work with the whammy bar just before the chorus is still there like in the original. The guitar solo remains exactly intact, which I think is fantastic. Very melodic parts with a few fast leads thrown in.

“Follow Me” starts off with electric and acoustic guitar underneath a strong vocal delivery. Regan plays high bass notes during this opening progression that adds really nice texture. This Gasperini composition then suddenly kicks in with the whole band creating a great vibe. Pero’s snare hits are very direct and stand out nicely. As I am listening to these tracks through headphones, I notice that all the songs, this one included, the background vocals are so obvious in the mix and add a great depth to the songs. Yet again, the rhythm guitar drives the song. No one is overplaying. It really shows the years of experience that these players involved possess. It’s more about the songs, then about the players. There is a very nice harmony guitar section at the end of the guitar solo that really stands out to me.

“On My Own” is the last of the Gasperini compositions on the album. It starts off with a nice guitar lead going into a steady groove being held down by Affuso. It’s funny the difference in the two drummers is very noticeable. Affuso is very precise and sitting back a bit, where Pero is a little more upfront and hits slightly harder. Affuso’s snare is little different sounding from Pero’s and doesn’t seem as snappy. No disrespect to Pero, but I think I enjoy Affuso’s style a little more. In his own right, Pero was an amazing drummer and his skills are very evident on this recording. Just from my perspective of paying attention and making the comparison, Affuso is my guy. The middle section of the song has a great acoustic guitar/vocal breakdown. From there, the band kicks back in. The vocals are dominating, yet desperate at times in the delivery.

“I Give” starts with a cool groove played out by Pero on the toms, with a few cymbal crashes here and there. The steady guitar kicks in underneath this infectious groove. Howarth’s phrasing on this Howarth penned track is very well thought out. The chorus is quite moving and catchy. Pero plays along on the ride cymbal giving the song a very open feel. “Don’t Know” is another track that starts with acoustic guitar, with the vocals by Howarth and a harmonies being sung in the appropriate spots. The band then kicks in like a hard punch in the face. Pero’s drumming is very obvious and his fills are mixed nicely into this cool song. The heavy guitar played out is done very appropriately and yet again there is no overplaying. This fantastic album ends on a high note, with the second of two covers on this album. Four By Fate does a great job on Rick Derringer’s classic “Rock And Roll Hoochie Koo.” I find it cool that instead of the band singing the high vocal on the repeat of the chorus, Gasperini emulates it on the guitar. Howarth’s vocals are stellar on this song and if you didn’t know any better, you’d think it was Derringer himself. Affuso‘s drumming style is very evident. Affuso plays tight with great feeling.

Looking at this album retrospectively, it’s a great listen. As I stated, the musicianship is second to none. Initially, I was expecting maybe a more ’80s sounding album in the Frehley’s Comet vein than what it actually is. That was almost 30 years ago. Musicians evolve with the times and that is what Howarth and co. have done on Relentless. I highly recommend this album for not just Frehley’s Comet/Skid Row fans, but to the listeners that like great, heavy straight ahead rock.