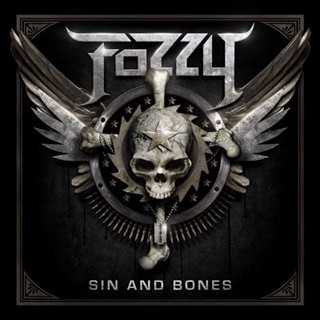 Review:
I know…. Fozzy, what kind of name is that? It sounds like a big fuzzy teddy bear. Nevertheless, I have always been intrigued with Fozzy given that WWE wrestler Chris Jericho is the frontman for the band. If any of you have read his two bestselling books (highly recommended and entertaining), his love of heavy metal music certainly comes across in them. Accordingly, I finally decided to give Fozzy a chance despite the terrible name. Some of you may feel that I am bashing the band, but even Jericho himself criticizes/questions the band’s name in one of his books. In any case, any band that has already released five CDs, albeit the first couple consisted mostly of cover songs, has to have some talent.

Fast forward to Fozzy‘s latest offering, their 2012 CD Sin And Bones — which is a good CD. The second song, “Sandpaper”, is most likely the top track as it is quite catchy and sounds original in a world where many heavy metal bands sound very similar. Perhaps the most surprising aspect of Fozzy is that it is a heavy band with heavy riffs. Rich Ward has the heavy metal riffs down to a ‘T’ and Jericho definitely sounds better when he is yelling or screaming rather than ‘singing’. Other favorites of mine include the lengthy 11 plus minutes of “Storm The Beaches”, perhaps Fozzy‘s ode to Iron Maiden‘s “Rime Of The Ancient Mariner”, the slower moody “Inside My Head”, the faster “Sin And Bones” with the Jericho yelps, and “Dark Passenger”.

There are only one or two weak tracks on this CD. “A Passed Life” is slower and difficult to listen to and shows Jericho‘s perhaps weaknesses as a lead vocalist – because as previously mentioned, Jericho sounds better when he is ‘screaming’ rather than ‘singing’. The heavy “Blood Happens” has some good parts, particularly the verses, but seems to be missing a great chorus to take the song to the next level. Rather, you are treated to some dark voice stating “Blood Happens” with the song slowing down considerably.

The two bonus tracks are solid. “Walk Amongst The Dead” is a shameless sing-a-long type song with its “Hey Hey Hey” portions and Fozzy pulls off the Black Sabbath classic “Fairies Wear Boots” quite well. On this track Jericho sounds like a young Ozzy Osbourne.

At the end of the day, Sin And Bones is a good CD that needs to be listened to a few times before you can start to fully appreciate it.