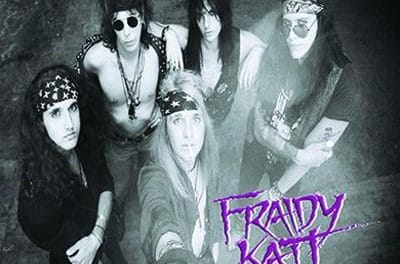 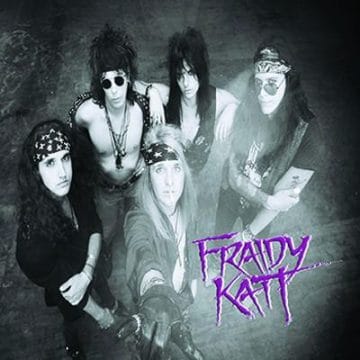 Review:
Glam metal from Canada (Toronto specifically) is sort of a rare occurrence (no disrespect intended) and when one does come about, it’s good to see and get some input from the Great White North. To further the cause and distinction of the band, Fraidy Katt, it was also the spawning ground of one Stacey Blades, who went on to be a guitar slinger for Roxx Gang, LA Guns, Angels In Vein and now Bobby Blotzer‘s version of Ratt.

Fraidy Katt began their pursuit of stardom in the early ’90s, with their brand of pure sunset glam in the vein of Heart Throb Mob, Foxy Roxx, and Talks Cheap. Stacey Blades himself said that if they had started a bit earlier, the band would have been huge, and with that statement, I can wholeheartedly agree, because this stuff just oozes the Hollywood scene and attitude. Just listen to the voice of Mick Anthony (a Taime Downe lite) and the strut and sass of the song “Cool Cruel Lady” (I just love the bass playing on this track) and you would say the same.

This release consists of two demos from Fraidy Katt that they did in the 1990 to 1991 time period. The songs from demo to demo don’t differ too wildly, whereas the second demo’s songs being just a bit more vibrant, and with slightly different song structure for some of the remakes and some added vocal enhancements. Anthony does sound a bit more mature though and not has candy coated in his vocal approach.

The CD contains the obligatory sugar coated glam ballad, a must have in any band’s repertoire for that day in age and the cool sing-along rockers, like “Sweet Sweet Suzy” and singing of hedonistic sex, drugs, and rock n’ roll. They all definitely convey the mood and moment. So when getting this release, you will smile and remember the “good ol’ days” and if you are the first time listener of the band (as I am), it will definitely make you smile about those past times. One thing I appreciate about many of these re-releases, is that I was aware of many of these bands in word (be it written or spoken) and/or seeing flyers plastered around town, but for many, it was just not possible to get everything. So thanks for the band and FNA Records for getting this to us, the loyal and rabid glam fanbase of today.

A great release, being a great time capsule of the era, for those glam purists and for all that missed the boat the first time around.

Reviewed by Will “Bones” Lee for Sleaze Roxx, March 2017