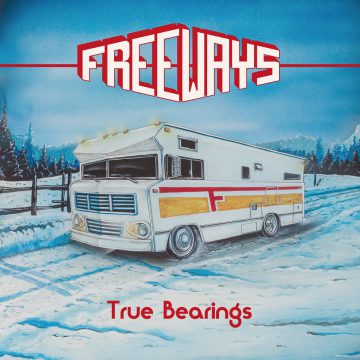 Review:
When Sleaze Roxx commander-in-chief Olivier hit me up recently to add to my retro review resume by blasting my opinion on some newer bands, I found myself scouring the cyber-wastelands for cool hard rock and roll bands. Yeah, I know many reviewers kinda require a band to toss a CD in the snail mail to get a proper review but seeing first off, I’ve never considered my writing to be any kind of proper, and secondly for some, that requires a dangerous disease risking trip to the post office, I’m more than happy to stream my ears off and thankfully, Bandcamp is loaded with all kinds of great music. Even better, Bandcamp is loaded with all kinds of great Canadian rock and roll and for anyone who even sort of knows me, you know I have this twisted, weird thing for Canadian rock and roll.

With common band interests like hockey, beer, and based on videos, hanging out by camp fires despite mounds of snow, Brampton hard rock band Freeways is as old school rock and roll as it gets. No surprise as their Facebook page lists Thin Lizzy, Blue Oyster Cult, Budgie, UFO, Status Quo, and fellow Canadians Bachman-Turner Overdrive as influences but while they do pique my classic rock curiosity, it’s the part of my rock and roll heart that loves Great White bands like Triumph, Santers, April Wine, and Coney Hatch that it appeals to more than anything. Down the middle of the road rock and roll where the passion is far more felt than the party. The kind of rock and roll that only real dudes in denim and old t-shirts can sincerely make and in that respect, Freeways are the real deal.

Wrapped up in cover artwork featuring an old school RV and band logo, this latest offering from Brampton’s coolest band in no uncertain terms delivers on the great bare knuckles rock and roll simplicity that is Freeways. With spot on performances captured with solid (but not overdone) production, tunes like opener “Eternal Light, Eternal Night” are given just enough power to drive things home while leaving room to experience the melodies in the verses and the clarity in Jacob Montgomery‘s vocals. The drums punch through just enough to carry things with even Sebastian Alcamo‘s radio friendly snare still landing hard enough for rock and roll. On the low end, bassist Amarjot Amrith fills in the space adequately enough to help make a great rock and roll bed for Montgomery and co-guitarist Domenic Innocente to flourish over. To the point, great sounding tunes that only a solid, together band can pull off and from the sound of things, Freeways fit the bill to a rock and roll tee. Cool thing is though, while Freeways are a great old school raw sounding rock and roll band, they also have some cool old school raw sounding rock and roll tunes.

Of the seven rockers on True Bearings, you will be hard pressed to find anything to push forward on with a mix of bar-made head boppers like “Battered & Bruised” and the edge of Foghat sounding “Dead Air”, driving rockers like “Sorrow (Love In Vain)”, and melodic hard rock ala “Just Survival” and the catchy-cool title track. Toss in the Triumph style groove of over six minute “Time Is No Excuse” and what you have is a tasty collection of choice guitar-driven seventies classic rock and roll for modern times.

At a time when over-produced, computer generated, band in a box faux sounds rule the airways and webways, it’s a downright rock and roll blessing that there is Freeways, a real rock and roll band that puts out actual flesh and blood made music. But what should we expect? If anything Canada is known for real good beer, real old school hard-nosed hockey, and yeah, real rock and roll.