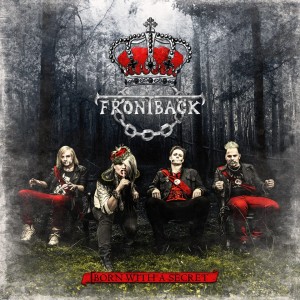 FRONTBACK
BORN WITH A SECRET
Released on April 2, 2013 (Rambo Music)

Review:
When it takes eleven years for a band to release its debut record, you know odds are it’s going to be a good one since the band members have had lots of time to fine-tune things.

Frontback‘s debut album Born With A Secret is comprised of eleven very catchy and upbeat songs. At times, it borders on pop rock with tracks like “I Won’t Go” but for the most part, it is melodic upbeat hard rock bliss with a simply killer guitarist in Axel Graneskog. Frontback frontwoman Anio Front‘s vocal delivery reminds me a lot of Hessler‘s former female lead vocalist Lariyah Daniels‘ singing, particularly on tracks such as the opener “You Can’t Save Me When I’m Gone” and “Stay Away.” It is true that both are of European heritage and have a bit of an Eastern or Scandinavian European laced English to their singing. The comparisons to Hessler circa their 2012 album Comes With The Territory don’t end there as I would likely guess that Frontback‘s opening track “You Can’t Save Me When I’m Gone” even without the vocals was a long lost slightly popper track from that era of Hessler‘s tenure if I did not know it was Frontback playing the song.

In a way, I am really glad that Frontback remind me of a more upbeat and catchier 2012 Hessler because there is a void for me to fill with the latter having parted ways with their last two female lead vocalists. I enjoy every track on Born With A Secret so much that I find it quite hard to pick my favorites for this one but I will go with “Running For Better Days” and “Time Is Running Out.” I am admittedly late to the party with respect to Frontback‘s Born With A Secret album given that it was released more than two and half years ago but better late than never. The great news about discovering Frontback‘s debut album a couple of years after the fact is that the band is poised to release its follow up album in early 2016.

You know an album is really good when I am seeking to find a physical copy of it even though I already have it in digital format and that is exactly the case as I am writing this review for Frontback‘s Born With A Secret! The bottom line is that if I had heard Born With A Secret in 2013 when it was released, it would have made my top 10 albums of 2013 for sure.

Frontback – You Can’t Save Me When I’m Gone [Album: Born With a Secret)]

First single for the upcoming debut album “Born With A Secret” with Frontback. The release of the album is set to March 29th for CD and March 27th for Digita…