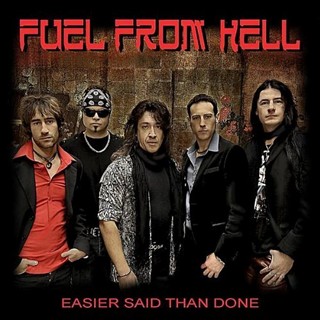 Review:
Fuel From Hell have definitely progressed since their formation over ten years ago. While the band employed a sound heavily influenced by L.A. Guns on their 2007 debut album Fill You Up With Five Star Gasoline the Italian natives now venture into slick hard rock territory. This change can mostly be attributed to new vocalist Phil Lasher, who brings a soother and more conventional voice to the proceedings.

Determining which era of Fuel From Hell I like better is a tossup, but one this is certain — Easier Said Than Done comes complete with some real gems. “Electrified” is one of those stand-out moments (even if the song does steal its intro from Alice Cooper‘s “Poison”) as it builds itself up towards the powerful and majestic chorus. “Poison Whiskey”, with its honky tonk piano, isn’t half bad either, but it’s during “Nowhere In The Night” that Lasher becomes a bit annoying — something that plagues this disc on more than one occasion.

The sleazy “Some Girls” almost fails due to the vocals, but the high-energy guitar work comes close to saving it — unfortunately there is no saving “Send Me Your Love” or “17 & Wasted”. It’s frustrating really, because the disc started off on such a high note, but before you assume Fuel From Hell are only capable of a couple great tracks the album ends a scorching note. “Midnight” hints at greatness, but it is the adrenaline driven “House Of Love” and the album’s shining moment “Bad Jane” that truly display Fuel From Hell‘s talents.

Far from perfect, Easier Said Than Done succeeds by bookending some mediocre material with absolutely killer tracks. If Fuel From Hell can streamline their song-writing, dumping the filler in the process, they could easily become one of hard rock’s best kept secrets — as there were enough pieces of brilliance here to pique my interest.