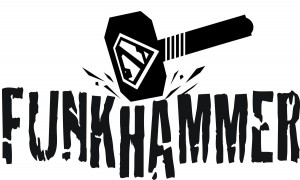 Review:
As the resident Nashville correspondent for Sleaze Roxx, I feel it is my duty to let the people of the world know about all of the excellent hard rock coming out of Music City. Nashville may be known to the outside world as the home of country music, but for me, it’s the home of hard rockers like Tom Keifer, Kip Winger, Mark Slaughter and a plethora of great, lesser known rock acts. There are plenty of great rock bands coming out of Nashville these days, like The East Side Gamblers (featuring several members of Tom Keifer‘s solo band), Tall Dark Stranger, The Tip, Black Shag, The Protomen, Fable Cry, etc.

To put it bluntly, Nashville is THE place to be for music. And so, while I’ll probably get around to addressing all of those individual bands at some point (specifically when they have a new release for me to tell you about), today I’m going to focus on a great Nashville act called Funkhammer. Now, you may be thinking to yourself, “Hey! This is Sleaze Roxx! Why should I care about a band that has the word ‘funk’ in their name?” Well, dear Sleaze Roxx reader, allow me to explain.

You see, Funkhammer are indeed a funky band. However, Funkhammer are also a band that rocks quite a bit. Remember all of your friends who would insist that Prince was actually a really good guitar player, and when you finally got around to listening to his solos, you couldn’t help but insist that he was pretty rad at playing his instrument? Okay, now, imagine instead of all of the synthesizers and weird instruments that are usually on a Prince album, Prince is doing his awesome guitar stuff all the time, but makes it sound a little bit more like Van Halen and Extreme, with perhaps a little bit of KISS and The Who thrown in. That’s what you get with Funkhammer.

Funkhammer is the brainchild of their guitar-wielding frontman Toddzilla, an excellent guitarist who I would best compare to Nuno Bettencourt, Richie Kotzen, Steve Stevens, Eddie Van Halen, Ace Frehley and Prince. If that sounds like a really awesome combination, that’s because it is. Funk bands tend to be mostly reliant upon the bass as the signature instrument, but Funkhammer is a guitar enthusiast’s dream; there are plenty of catchy riffs and face-melting solos to satisfy the hard rocker in all of us.

Toddzilla‘s material on the album varies from more straight forward hard rock to slow and funky, but the rhythms of the music are always interesting. There’s nothing boring or conventional about the album, and that’s what makes it so fantastic — it rocks so much more than the average funk album, and it’s so much more funky than the average rock release. Honestly, it’s like a much better version of Extreme.

The album is no longer for sale, but you can download all of the songs for free on the band’s Reverbnation page, along with two new songs (“SH!T” and a live version of “You’re So Funkay”). If you like Extreme, you need to download this stuff — end of story. If you don’t like Extreme, I still say give it a shot, because I’m not big on them and I found a lot to enjoy here. Start off by checking out “Ain’t That Complicated” and “Sister Salacious” (two of the more rockin’ tunes), and then download the batch. This is a band worth watching, and for the low, low price of free, what do you have to lose by checking it out?

Reviewed by Greg Troyan of Lipstick for Sleaze Roxx, August 2015