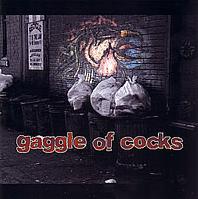 Production:
Produced by Ron Allaire and Gaggle Of Cocks.

Review:
With a name like Gaggle Of Cocks, you know right off the bat that this trio is
going to be slightly off-center. With the hilarious opening line of “I got a horse,
and he’s 44”, you wonder if you accidentally inserted a Butthole Surfers disc by
mistake. While the band retains their humor and quirkiness throughout, the music itself
reminds me of Circus Of Power singing C.O.C. songs.

Standout tracks include “Horse 44” (an excellent aggressive tune), “Bomb Me”, “My Little Hell” and “Loading”
but the entire album never deviates from Pat‘s gruff vocals and the chugging
riffs. In fact, it’s the vocals that really stand out on American Trash, and
it would be interesting to hear them front some less depressing material. The band is able to take
elements from hard rock, stoner and grunge and mix it rather well–although
at times, such as “King Mr. Porno Cock”, it doesn’t work very well.
If you like your music on the gloomy and sludgy side, check out Gaggle Of Cocks
at their website.