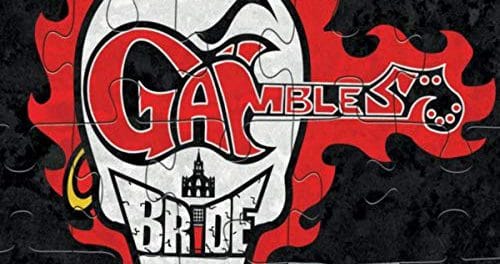 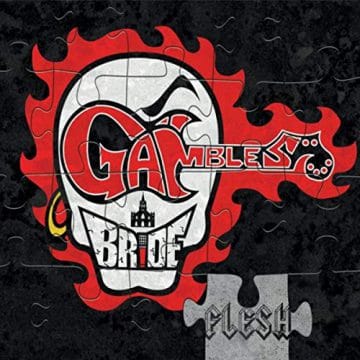 Review:
From the opening chord of track one “State Of Emergency” from the debut long play Flesh from Washington DC / Maryland’s power duo Gambles Bride, you are hooked, line and sinker. The opener is easily worthy of the cost of admission on its own. A must for fans of King’s X as this track could slip in between the sheets of any King’s X release and both guitarist Mike Gamble and vocalist Gene McBride could stand in for Ty Tabor and Dug Pinnick if needed. I kid you not.

As we move through the disc, the similarities to King’s X stay true and strong but we see Mike and Gene dabble into some more modern sounding hard rock bands they are influenced by in the likes of say Sevendust or the Deftones. I hear two heaping handful of Living Colour, maybe even some Fishbone and dare I say some Suicidal Tendencies in there too. But this menagerie of influences are just that, influences, and Gamble Bride are 100% original in the 11 hard rock songs presented on Flesh.

“Hey You,” “Flesh” and “Day Of Atonement” all carry the hard rock torch onward keeping the listeners heart, head and fists a pounding with two tackle boxes full of harmonies and hooks, melodies and rhythms to shake anyone’s hips. Those tracks also have fretwork from Mike that will have the guitar aficionados clamoring to get into Mike‘s head to figure out how he did that. “Let This Be The Last Time” and “Never Thought” ‘slow’ things down a bit and give the listener a taste of Mike and Gene‘s ‘softer’ side with a pair of arena rockers with a healthy smattering of cigarette lighter love song styled rhythms and poignant heart felt songwriting that would be fodder for many’s broken, healing or just plain ole heart. The solo in “Never Thought” is a standout for me as it plays well with the song’s timbre and it is played quite proficiently and pairs nicely with Maurice’s synth work.

“Left Side” is another hard rocker that sways between modern hard rock to slower melodic rock to almost arena rock and back, with clean guitar versus distorted and the always present Gene‘s Pinnick fueled wail tying all the elements together perfectly. There is a definite Tom Morello guitar element in this one. See if you can catch it. It’s not that hidden so not to worry. “Letters” slows things down ever so slightly, but mostly tempo speaking as the guitar work is still distorted and heavy, but Gene‘s vocal work is as pure as the driven snow and layered in harmonies. The lyrical topic is a bit heavy as can be implied in the songs title “Letters” — a man’s journey captured in his ‘letters.’ Of course, where and why he is writing these letters is up for interpretation and only adds to the song’s impact.

“Return The Pain” is another poignant hard rocker with a very heavy song topic yet presented in a nice little hard rock package that you might miss if you get swept up in the tidal wave of the music. “Testing Time” is a definite modernistic metal tune, but still keeps its hard rock principles with its layered harmonies/vocals and a killer supremely infectious “Hit me with the ya ya ya’s” vocal. This track is a real dinger for certain and one of my favorites. The disc wraps up with “The Ride And Tease” which is just that — a little teaser of the guys talking while on a ‘drive’ and fanning through the radio stations trying to find something worth a listen, stopping shortly on song snippets (played by the band themselves) in various styles from country to gospel, and finally landing on an alternate version of the band’s very own “Letters.” They play it to the fade out and I must say I’d like to hear the whole tune in the manner they presented it here as it is a great song period but the alternate is just that, a nice alternative to the original.

Standouts are a plenty on Flesh, but today “Letters,” “State Of Emergency,” “Never Thought” and “Let This Be The Last Time” are front runners. This disc sits proudly in the Martinsane‘s unknown but must own collection. Do yourself a musical favor and get your hands on this silver pressed digipac release from Gambles Bride, show them some love so they can make some more music for us to enjoy.

Gambles Bride‘s “Let This Be The Last Time” video:

Let This Be the Last Time

Provided to YouTube by FandalismLet This Be the Last Time · Gambles BrideFlesh℗ 775792 Records DKReleased on: 2018-01-21Auto-generated by YouTube.