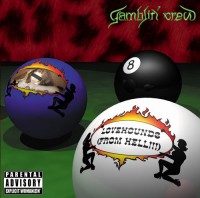 Review:
Germany’s Gamblin’ Crew claims that ‘poserrock’ is their passion, but the problem with poser rock is that it is usually style over substance and that is almost the case with Lovehounds (From Hell!!!). There are some cool moments here, and the band does have a sense of humor (the cover has a warning that states “parental advisory: explicit womanizin'”), but there are too many flaws to make this a worthwhile purchase.

If the entire disc sounded like “She’s Got Wheelz” I’d be praising it up and down. I like it how slowly builds up to the chorus, it is one of those songs that beg to be cranked at full volume. “She Says…” isn’t bad musically, but points out one of the things wrong here – the vocals. Too often the vocals reach a spine tingling screech or a sleep inducing Balaam & The Angel wistfulness while dishing out some of the silliest lyrics in recent memory. Now I have no problems with songs about sex (which describes every song here), but lyrics such as “like a Trojan-horse my little soldiers stormin’ you”, “take her hard and cream her again” or “”if his hands touch their boobies he’s drunk as hell” leave me shaking my head. It’s like the musical equivalent of a B-movie train wreck.

Musically I have no problems with Gamblin’ Crew at all, they lay down some impressive solos and the song “Lovehounds” has a cool shuffle about it. But the vocals and utter silliness of the lyrics is just too much to overcome. Although, as weird as it seems, I’d be interested in hearing what Gamblin’ Crew comes up with next. I’m not going to write them off completely, as they could become one of those humorous bands (intentional or not) that bring a smile to your face. Check them out for yourself at www.gamblin-crew.de, and maybe you can figure out what the hell binch drinkin’ is!