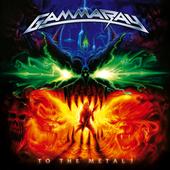 Production:
Produced and engineered by Dirk Schlachter and Kai Hansen.

Review:
Gamma Ray have experienced a bit of writer’s block during the course of their last couple of albums. They appear to have lost their inspiration, their desire and passion for music — from the fans perspective it’s as if Kai Hansen and Co. are simply going through the motions.

On Gamma Ray‘s latest album To The Metal things begin in familiar fashion where we see Hansen and the boys blatantly borrow from the ‘Metal Gods’ Judas Priest. A note to Kai Hansen, there’s only one band aside from Judas Priest who can sound like Priest, and that is Primal Fear. There’s no room for another, thank you very much.

Things however improve about a quarter way through To The Metal when the beast is unleashed. It’s like Gamma Ray dug really deep and came out with material that was on par with their late 90’s glory years.
Talk about going back in time as Hansen welcomes back Helloween cohort Michael Kiske on album standout “All You Need To Know”. A couple of others that are a notch above the rest are “Chasing Shadows” and “Shine Forever” which are some of the best songs that Gamma Ray has done in close to a decade.

To The Metal is a return to form for Gamma Ray who appear to be back on track. The band is loose, having a lot of fun, and it shows.