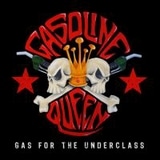 Review:
Gasoline Queen is yet another group in the long line of good Swedish bands that are playing dirty and sleazy rock. The band, with the current members, was formed in 2004 and consists of Dee Hoffmann (vocals), Mart Wildheart (guitar), Mad Dog (bass), Mike Spider (guitar) and Andy McQueen (drums). They have released three promos/EP’s, with Gas For The Underclass being their third release.

Gas For The Underclass consists of four songs which are all pure rock ‘n’ roll. From the opening riff in “Down All Around” to the last note of “Stalker” this is kick ass rock ‘n’ roll! I can’t help but put this CD on repeat, and replay it when the four songs are over. Besides the two songs already mentioned, the CD also consists of “Young Man Burnin'” and “Broken, Cursed & Damned” which are my two personal favorites, but all four songs are worth listening to more than once.

Gasoline Queen manages to write great catchy songs with good melodies and memorable choruses. Dee Hoffman has a great voice, the guitars are superb and the bass and drums hit you like thunder and lightning. Their inspiration lies in the 70s rock and street punk as well as 80s glam rock. They mention bands like The Who, Led Zeppelin, Guns N’Roses, Gluecifer, and Bon Jovi as their main inspiration. There is not much new about Gasoline Queen‘s music, but as the band say themselves; “Its fuel for your rock ‘n’ roll soul!”

There are only four songs on Gas For The Underclass and to me that’s not enough, I want to hear more from these Swedes. On their MySpace page you can hear more songs from their two other promos and they are almost as good as these four songs. I hope that Gasoline Queen will release a full length CD in the near future as I want more dirty and sleazy rock from them!