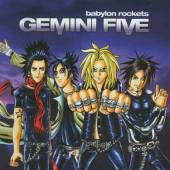 Review:
Are bands like Gemini Five the future of trashy hard rock? It certainly seems that way as crunchy riffs seem to have replaced the slick guitar solo for this new breed of rock sharpshooters – but there is a difference between crunchy and the down-tuned talentless crap that is shit out by nu-metal bands on a daily basis. This new brand of sleaze takes the best of the 80s bands and mixes it with it to early 70s garage rock and sounds from today. In the case of Gemini Five picture late 60s acid kings Blue Cheer kicking the crap out of Shotgun Messiah and Black N Blue in a filthy back alley.

“TwentyFourSeven” has commercial appeal written all over as it has one of those infectious choruses and some lead swirls over top of the guitar crunch. The female backup vocals on “Get It Off” flesh out the aggressive track and then things slow down on “Hardcore” which has a bass-line that reminds me of a heartbeat, and interesting sound. “Automaticool” reminds me musically of the Beautiful Creatures, but vocalist Tin Star has a much smoother voice, not the usual gritty and gruff delivery that bands of this genre employ. Some songs, like “Chemicals Between Us”, are just too commercial for my liking – it sounds like hundreds of other 80s melodic rock ballads. “Neon Kicks” is one of the better tracks here due to its 70s guitar tone clashing with Gemini Five‘s trademark sound – but “Suicide Tuesday” gives it a run for best song on the disc.

It is obvious that bands like Motley Crue were huge influences, so you have to wonder why new Crue material fails to be as cool as this – Gemini Five is a strange case of the student becoming more interesting then the teacher. Is their music as good as, say “Too Fast For Love”? Of course not, but they wisely add enough changes to the original tattooed and pissed-off rock blueprint to make Babylon Rockets a worthwhile listen. In fact the album is worth it for the killer techno-metal version of the dance classic “You Spin Me Round” alone, which can be heard at www.gemini5.net.