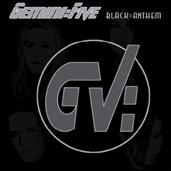 Review:
Gemini Five appears to have switched sounds on their second release Black Anthem. Whereas their debut was sleazy and catchy, this album is gothic and dark. The Gemini Five transformation can be compared to that of Taime Downe switching from Faster Pussycat to The Newlydeads, which was just as disappointing as this album. Marilyn Manson fans should enjoy this CD, but I’ve never liked his work.

Albums like this just seem to take all the fun out of music, and come across as a depressing wall of sound. I can’t understand why a band that had fun with songs like “You Spin Me Round” and “Babylon Rockets” has completely turned their backs on melody in favor of this industrialized mess. I kept skipping through the tracks in order to find something that resembled the Gemini Five sound I enjoyed, and could only find a handful of tunes that would have fit on Babylon Rockets. “Insane Is Sane”, “Sinners Parade” and “Bring On The Monkey” are the only songs that interested me in the least, and even they wouldn’t have been stand-out tracks on the debut.

In my opinion, Gemini Five have taken a turn for the worse with this uneventful experiment. The industrial Marilyn Manson sound found here may bring the band more commercial success, but it bores me to death. Sure the sound is more modern and darker, but that doesn’t make it better. Black Anthem sounds like the band is completely ignoring the glam fan base they once coveted – I hope they don’t expect fans of the debut to blindly accept this new direction, they may be sadly mistaken. Buy this one at your own risk. www.gemini5.net.