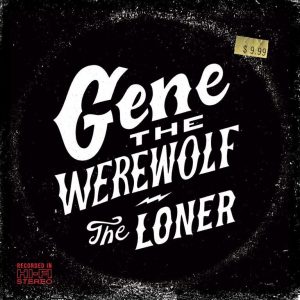 GENE THE WEREWOLF
THE LONER
Released on June 17, 2016 (Independent)

Review:
I often equate a band’s appearance with the way they sound. If I think a band has a cool name, I’ll check out its Facebook page and if I see pictures of the band member sporting short Clark Kent hair and a longer beard, than I get an idea of how the group will sound as it’s usually new folk music or something that’s not quite the fun rock I love. So when I heard the name Gene The Werewolf, I was skeptical. When I saw what he looked like, I instantly equated him with a hipster folk rock act. How wrong I was….

Spinning Gene’s new track “The Walking Dead,” I was instantly hooked. I needed to hear it all. The man can write such infectious hooks, melodies and most of all he can sing! Gene‘s vocals are in the true tenor range with a top notch crispy rasp. There is definitely a classic rock influence here. Mainly some AC/DC style songwriting and riffs, as well as a little Rolling Stones. This isn’t metal with super flashy guitar solos or fancy drum fills, but what it is from the second you hit the ‘Play’ button is simple, honest blues driven rock n’ roll.

The riff to “Let It Loose” is just fantastic and never fails to get the adrenaline flowing through my veins. I love hitting the gas pedal and putting this on. The tracks “Too Kool For Skool” and “Fortune And Fame” provide examples of blistering rockers, while “The Loner” and “World To Rely On” are straight ahead fun. The title track “The Loner” also sports a solo from fellow Pittsburgh resident Reb Beach from Winger fame!

I suppose I would describe this as un-contrived working man’s rock. All told, these incredible songs and Gene’s breathtaking power vocals combined to produce a stone-cold classic album. Other rock albums of the genre may boast more old-style Top 40 hits or even more crowd-pleasing gimmicks but few can challenge the excitement and reckless abandon captured on Gene The Werewolf‘s new album.

Aptly titled The Loner, Gene The Werewolf forges on in the USA with his unapologetic straight ahead classic rock style in the face of a sea of vapid pop music that now dominates his country.

“The Walking Dead” featuring Reb Beach (Whitesnake/Winger) taken from Gene The Werewolf’s new album “The Loner” out June 17, 2016! PRE ORDER “The Loner” on i…