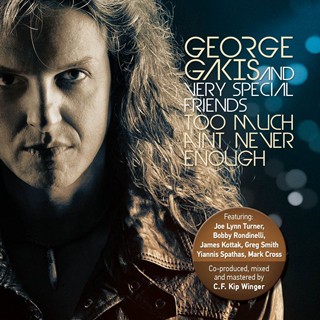 Review:
The ‘David Coverdale‘ of Greece has a lot of friends. In fact, George Gakis‘ website has a special section devoted to meet and greet type photos where you’ll find Kip Winger (who co-produces and mixes Too Much Ain’t Never Enough), Klaus Meine, Joe Lynn Turner, and of course the old snake charmer himself. And as if that ‘ain’t never enough’, James Kottak and Mark Cross thump the old tubs when the mood takes them.

I mention all this because George Gakis‘ new album is a little like his web site — well planned, beautifully constructed, finely polished and full of tributes to so many of the great names in rock. Even the album’s title echoes a certain diamond of yesteryear. Sadly though, Gakis doesn’t stand a chance in the face of all this incredible talent, seemingly content to merely imitate a sound and style that he clearly genuinely lives for.

“I Married Trouble” is a solid enough opener thanks to a reassuring heavy riff courtesy of Nick Zouros. It’s a great sound and the track promises so much that I almost forgive the blatant ‘tribute’ to Led Zeppelin‘s “Kashmir” that follows. Well, Coverdale had “Judgment Day”, so let’s give George a break for “Fame”. Joe Lynn Turner then features on the duet “Street Of Broken Dreams”, and despite matching Turner admirably, no matter how I try, Gakis quickly begins to run out of credit as he throws every cliched lyric at the wall he has his leather covered back to. By the time we hit the truly dreadful “Days Of Rock ‘N’ Roll”, where Gakis name checks all his favorite songs of the 80s, I’m smashing plates all over the house. “We were livin on a prayer/had a sweet cherry pie/fire woman of mine/our love was a bed of nails/you’re in love can’t you see/with hot girls girls girls’ — Jesus, this guy makes David Coverdale look like Shakespeare!

I like George Gakis — I like him because he’s the passionate fan in all of us, one who has a great bluesy voice. It takes guts to duet with Joe Lynn Turner and pull it off, but George must drop the ‘I’m not worthy’ act and make his own mark. There are moments where he does that on Too Much Ain’t Never Enough, but the very special friends need to be quickly replaced by some very special ideas.

Reviewed by Mark Redmayne for Sleaze Roxx, May 2012