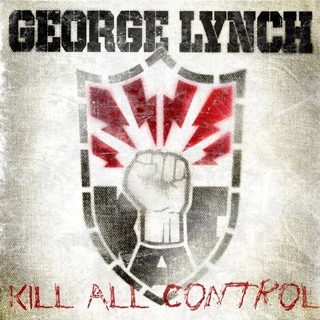 Review:
Once upon a time there was a great hard rock guitarist named ‘George’. He rose to stardom back in the ’80s with the hit band Dokken, mastered his unique style and later started up his own band. During this time he built a cult following among up and coming guitarists — then he decided to go ‘modern’ — and his latest release, Kill All Control, is an excellent argument as to why he should stick to his guns.

George Lynch needs no introduction as he is a rare breed of guitar virtuoso, one with no technical background but with an awesome feel. Like many complete artists, Lynch likes to experiment with styles. The first time he went completely over the top was in 1999 when, trying to fit in with the trends of the times, he released a rap-metal recording called Smoke This. This CD shocked his fans, though it was not a bad record at all — although he completely changed his style, the album included some decently written tunes with some killer guitar solos, that none of the rap-metal guitarists of that time could ever dream of putting out.

Ever since Smoke This Lynch has drifted closer to his old guitar oriented ways, but he never really recaptured the sound he was known for in Dokken (or even Lynch Mob). He often opted for a more modern feel, while keeping his edge. His last recording, Smoke And Mirrors with the revamped Lynch Mob, showed that a band can effectively mix modern production values without compromising their hard rock edge.

But with his latest solo effort George Lynch seems determined to fit his style with what’s popular now. By no means is Kill All Control a bad record (it has some well written tunes), but the problem with this release is that you cannot shake the feeling that you’ve heard it somewhere else — quite recently even.

A lot of Kill All Control sounds like something else. Songs like “Fly On The Wall” and “My Own Worst Enemy” bare a really strong resemblance to Sixx: A.M. “Voices In My Head” on the other hand sounds almost exactly like Alice In Chains‘ “Check My Brain” — it has the same sound and almost the exact main riff. It almost seems like Lynch tried to re-record this song by borrowing the chorus from some other AIC track. One very cool song, the up-tempo rocker “Sun”, shows Lynch blatantly ‘borrowing’ the main riff from Motorhead‘s “Ace Of Spades”.

The album’s production is well done but with one minor issue — on some songs the guitars are clearly toned down in favor of the vocals. One of the best songs on the album is “Done”, a mid-tempo rocker that has a really killer solo — the only problem is that you can barely hear it! The funny thing with the vocals on the other hand is that this record is sort of like Frankenstein vocally. The recordings started with London LeGrand, with whom George worked with on the Souls Of We project (fun fact: Kill All Control was released as a Souls Of We album in Japan only), then got other singers to fill in while LeGrand took a pass. The result is that on the majority of songs the singers are cramped together with one doing the verse and another handling the chorus.

All in all the main strength of Kill All Control is that, regardless of any tone he tunes his gear to, Lynch writes really good and catchy songs. Some of the tracks here are really well written, even if the style might turn some of the less tolerant sleaze rock fans off. The problem some people may find with this CD, apart the obvious copying of other band’s styles and riffs, is that it sounds like the producers tried their best to make it into a very modern sounding album.
If Lynch would stick to his guns more, rather than trying to record some Sixx: A.M. or Alice In Chains sound-alike, he would probably record a killer rock CD. While he decided to go the other way, what one gets when buying Kill All Control is a solid collection of modern rock songs sounding a lot like something already heard before on modern rock radio. This disc gets a 7 out of 10 in my opinion, but only a 3 if you are a hard core sleaze rock fan.