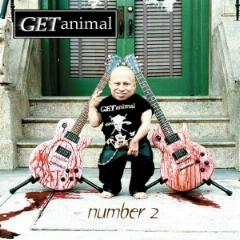 Review:
Get Animal is a band that Adam Bomb put together under the name Pink Gibson. Adam Bomb has been rocking for years and has had some of rock’s hottest players jam with him, including Little Steven, John Paul Jones and Michael Monroe!!

This CD features cover artwork with Mini Me grabbing his crotch while posing between two bloody pink guitars. Get Animal play catchy tunes with excellent guitar work. Adam‘s guitar playing is a cross of Ted Nugent and Eddie Van Halen on acid.

All the songs on this release are pure dirty and catchy chorus rock and roll. The Van Halen-ized “D.W.I.” and the Grand Funk-esque opening riff of “Je T’aime Bebe” highlight Adam‘s blazing fretwork. Adam shows his influences on the AC/DC/Buckcherry sounding “Better Red Than Dead”, and proves that older artists still know how to throw down, without sounding dated.

Adam Bomb has released albums and toured since the mid 80’s, when I first witnessed him in support of his single “I Want My Heavy Metal” and with the Pure Sex album (featuring the Sigue Sigue Sputnik copped title track) and through this release, which I had the pleasure of witnessing him perform in Los Angeles en route to record in Hawaii. Live, Adam sweats, spits blood and sets his guitar on fire!!! He is one of the last great rock and roll performers I have seen recently. More info can be found at adambomb.com.