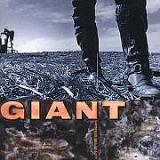 Review:
The first of Giant‘s two albums, 1989’s Last Of The Runaways is a well produced hard rock album, although way too ballad-heavy for my tastes. While the softer songs all stand up on their own, there are just too many of them, and the album gets boring, despite excellent musicianship.

Musically, however, the band is very sound and the record is very sleekly produced. Despite sappy lyrics that all sound like they were written by Don Dokken (not a good thing), they all have very catchy and well constructed melodies. They sound like a mix of U2, Bonham, more U2, some Whitesnake, and more U2, led by vocalist Dann Huff, who sounds almost exactly like a carbon copy of Bono. Even though U2 drives me up the wall, Giant‘s brand of hard rock doesn’t do so.

Towards the middle of the album, Giant turn up the rockin’ a few notches, taking a break from the softer side they had been exhibiting. “Shake Me Up” and “The Big Pitch” — the only two non-ballads — are probably my favorite tunes on the album. If they had gone with a few more rockers, the album would have been a lot better, in my view.

Their second album, 1992’s Time To Burn, goes that route and is a much better offering. Even with the brilliant musicianship and beautiful melodies, I found Last Of The Runaways very underwhelming and disappointing.