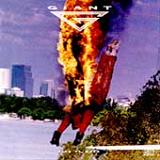 Review:
That’s better! I knew Giant could lay off the marshmallows once or twice more and come up with some harder material. Giant‘s second album, Time To Burn, is a huge improvement over their rookie effort from three years previous, Last Of The Runaways.

They start off with a bang with “Thunder And Lightning” (pun very much intended) instead of starting off with a sappy ballad which plagued most of the first album. In fact, while all but two of the eleven songs were softer on Last Of The Runaways, there are way more solid rockers on this record. The lyric writing is also vastly improved to go along with their knack of creating very good and deep melodies. Dann Huff also reaches back and lets it fly more than once proving that he can sling that ax with the big boys, along with proving his Bono-esque voice works for metal on the rockers, especially the speedy title track.

“Thunder And Lightning,” the title track, and “Stay” (which had a nifty music video featuring the band playing inside a sand castle) are the standout tracks, although there really aren’t any stinkers (must have gotten them all out of the way on Last Of The Runaways). Every aspect has improved with this album, but it was sadly their last. They were definitely going in the right direction; I can only imagine what their third album would have sounded like.