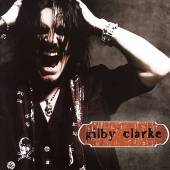 Review:
I’ve always liked Gilby Clarke, he appears to be a likeable and down-to-earth guy in a profession filled with egomaniacs. When Axl Rose destroyed the Guns N’ Roses band Gilby struck out on his solo career, a career that rivaled (and at times eclipsed) bandmate projects such as Slash’s Snakepit and Izzy Stradlin & The Ju Ju Hounds. Gilby has always had a knack for writing dark bluesy hard rock or else sugary power pop.

Predictably, the bluesy hard rock songs are the ones I enjoy the most. “Cure Me… Or Kill Me..” and “Tijuana Jail”, both from Gilby‘s debut offering Pawnshop Guitars, offer up an incredible opening one-two punch. Both songs are perfect examples of no-frills rock that find Gilby at his best. However that is also part of the problem with this greatest hits release, and Gilby‘s career in general, he was never able to top those two killer tracks and the remaining songs simply aren’t as good.

I have to give the man credit though, he tries hard and doesn’t lose direction. The song “It’s Good Enough For Rock N’ Roll” is good enough for me (just like the lyrics suggest) and oozes with a swagger that is fleshed out with piano and harmonica. “I’m Nobody” has a touch of that pop sound that defined his early glam career and the disc ends with the great “Judgement Day”. That song asks “I wonder how I’ll be remembered?”, and I’ll remember Gilby as a hard rocker that stayed true to his roots and kept things honest. Artists like this realized long ago that you don’t have to be flashy to be great, you need a certain attitude and feel – some musicians have it, some don’t.

If you have all of Gilby Clarke‘s CDs already I don’t think the new version of “Black” (sung by Rockstar Super Nova runner-up Dilana) is enough to warrant purchasing this release. But if you are sick of waiting for Axl Rose‘s Chinese Democracy and looked over these tunes the first time around this would be a great place to start. It’s a bit odd that Gilby Clarke‘s Candy and Kill For Thrills work was overlooked yet his Col. Parker phase was included. These are all minor complaints however, Gilby is a great guitarist, has a cool voice, and occasionally records some flawless tunes.