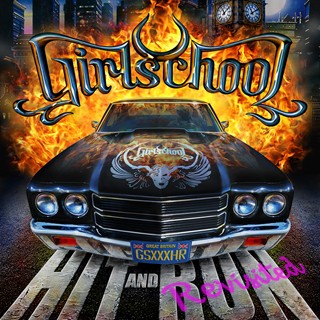 Review:
When a band sets out to re-cut classic songs from their back catalog, it’s usually met with apprehension by the band’s core fan base. When a band sets out to completely re-record an entire album — that’s downright insanity. However that’s exactly what Girlschool have done with their 1981 classic/signature album Hit & Run, which the band has ‘revisited’ some 30 years later.

I remember the first time I heard Girlschool — and they knocked my socks off. Keep in mind that in the early ’80s there were very few women that played this brand of driving hard rock ‘n’ roll, and Girlschool gave their male counterparts a run for their money — and the fact that they were linked to Motorhead made them even cooler at my prepubescent age. Hit & Run was my introduction to the band, so when they issued a newly recorded version of the album the first thing I had to ask was why? If it isn’t broke then why take the risk of tainting your legacy? Then again, their last original studio album, 2008’s Legacy, was incredibly boring and lifeless — even the inclusion of guests such as the late great Ronnie James Dio, Tony Iommi, J.J. French, Eddie Ojeda, Lemmy Kilmister, Phil Campbell and Neil Murray didn’t help. So I suppose after the cold response to Legacy the thought of recording Hit & Run in 2011, and updating the sound and the production, seemed like a great idea.

The band today consists of most of the members who recorded the original version of the album. Kim McAuliffe handles co-lead vocals and guitar, Enid Williams handles bass and co-lead vocals, Denise Dufort remains on drums, and guitarist/vocalist Kelly Johnson, who passed away in 2007 when she lost her battle with cancer, has been respectfully replaced by guitarist Jackie Chambers.

The band sounds very good on these re-recordings, and the production really adds new life to the songs — giving them more muscle and a huge bottom end. Tracks like “C’Mon Let’s Go”, “Hit & Run”, and “Kick It Down” still hit the spot with the downside, as was the case all those years ago, being their blasphemous cover of ZZ Top‘s “Tush”, which is second only to Joan Jett‘s lifeless version heard on her The Hit List album. Girlschool still have chops and it’s evident throughout Hit & Run Revisited — this version, sonically speaking, destroys the original — but what is sacrificed is the rebellious and youthful attitude of the classic recordings.