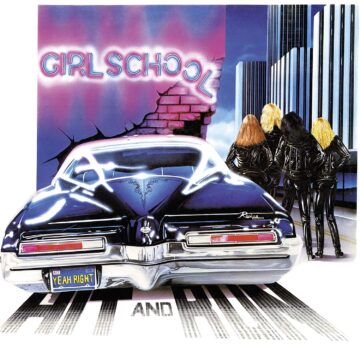 Review:
It’s almost impossible to believe that this album is 40 years old! That’s four decades since I stood in Dingwalls gazing up adoringly at these women who had the entire crowd in the palm of their hand from even before the first note was struck. Heavily championed by Lemmy and rightly so, and after the success of their 1980 debut Demolition, Hit And Run hit the shelves complete with eye catching neon cover, to cement their ever growing reputation.

“C’mon Let’s Go” is all snarling, snotty  late teenage girl gang lyrics that still sounds as rousing and vital as it did back then. The whole band explode out of the starting block and you are very aware that you are witnessing something pretty special. “The Hunter” literally sneaks up on you with its subtler, almost swampy feel. There is a gnarly, curled lip threat to the song that still makes the hair on the back of my neck prickle. “(I’m Your) Victim” is a frenetic, no nonsense rocker that completely disqualified any notion of the time that women couldn’t rock. “Kick It Down” further exemplifies that they certainly could with one of the most storming songs on this or probably any of their albums. “Following The Crowd” steps back a little in pace but is no less genuine as Kelly Johnson’s vocals are deeply heartfelt amid the throbbing, insistent production. The growlingly seductive vocals continue on “Tush” which is possibly the most understated track on the album.

“Hit & Run” showcases the band’s togetherness further with the rhythm section of Enid Williams and Denise Dufort on bass and drums respectively, further showing that they are equally as perfect as the twin guitar virtuosity of Kelly and Kim McAuliffe on a title track that is seared in the memory and should have been a huge worldwide hit. “Watch Your Step” has a slight Thin Lizzy tinge and is obviously none the worse for that, whilst “Back To Start” is sleazy, plaintive and seductive all at once – a distinctly difficult feat to pull off but they manage it with stylish aplomb. “Yeah Right” is a return to the teen angst of the opening track – it’s cheeky and fun with tongue firmly planted in its sweat stained cheek, and “Future Flash” concludes the album with a beautifully produced, savagely whispered statement of intent.

Much maligned at the time as a “difficult “ follow-up to the landmark Demolition debut, this in my humble opinion is a much better, more solidly consistent set of songs and the band has never sounded this instantly infectious and glorious since, despite some very good subsequent albums. Since the sad passing of the wonderful Kelly Johnson in 2007, the band has remained together with mainstay Kim McAuliffe and a sort of revolving door policy of Williams and Dufort, and Jackie Chambers, along with members of Rock Goddess. They even re-recorded this album in 2011 as a kind of a tribute to Kelly, which was honest and heartfelt but simply didn’t have the essence and – let’s be honest – magic of this original release.

Girlschool have influenced so many great bands since their trailblazing inception, from the aforementioned Rock Goddess to the later brilliance of bands such as The Donnas and The Amorettes. Even if they hadn’t done any of that, they would still have produced this superb , underrated, stirring and joyous album that has remained in my all-time top five since I purchased it on a wet Wednesday in Kentish Town all those decades ago. Essential.