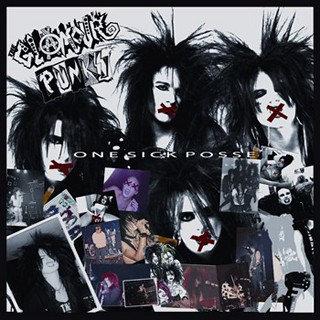 Review:
Finally, after 20 years, the Glamour Punks fans’ prayers have been answered. But One Sick Posse isn’t a release of old re-mastered demos like Can’t Fake The Punk… no siree, this is 2012 studio produced versions of original Glamour Punks songs.

This is how the Glamour Punks would have sounded if they’d landed that deal before grunge came along and ruined the party — and fuck me, they sound great! With a full production behind them, the self dubbed ‘One Sick Posse’ have now been able to realize their true sound and it’s a lot heavier than anything you’ve heard them play before. And that’s a good thing, because those old demos from the ’90s never did the band’s real sound any justice as they were always pretty heavy live.

Glam was the image, punk was the sound, and this is punk the way it should be — fast paced with attitude and right in your face. It’s full on from the outset. “Day In The Death Of America”, with its ‘Death March’ intro explodes into a full-blown assault on your ears that doesn’t relent throughout. With classics like “Video Nasty”, “Hated By Millions”, “Anti Social Child” and “Home Is Where You Hang Your Attitude”, One Sick Posse will please diehard fans.

I should give a special mention to Spazz Draztik‘s drumming on this album — it’s incredible, as his fast fills really add aggression and the rhythm section is absolutely solid on this. Credit also goes to ManD (vocals), Skitzo (guitar) and Alley (bass) — collectively they have done a killer job on this CD and brought it bang up to date without straying too far from their roots. The Glamour Punks are going through a huge revival at the moment, playing a reunion gig at the Roxy on June 2nd with Blackboard Jungle and Swingin’ Thing, and they have a DVD coming out soon.

If you are a fan, this is a no brainer — even if you liked the demos then this is a must have given that the production is first class. I’d love to see the Glamour Punks get back in the studio to put down some more of the old tracks, but we’ll just have to wait and see (although I’m not sure I can wait another two decades). This one comes highly recommended.