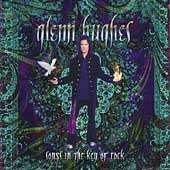 GLENN HUGHES
SONGS IN THE KEY OF ROCK
Released 2003 (Shrapnel)

Review:
Metal legend Glenn Hughes is back! The one-time member of Trapeze, Deep Purple and Black Sabbath (among others) has a new album showcasing his bluesy vocal delivery that includes one of the most unique screams in the history of heavy metal. For a man that is known more for his bass playing then singing, he definitely has an incredible set of rock pipes.

Throughout Songs In The Key Of Rock Hughes transforms his voice depending on the mood of the songs, which range from straight-ahead rockers to mid-tempo ballads. “In My Blood” has Hughes rushing out of the gate with a rocker that has a touch of funk guitar and a convincing chorus. “Lost In The Zone” takes several twists and turns during its incredible run. “Higher Places”, a tribute to Bonzo, fittingly staggers into Led Zeppelin territory. The eight plus minutes of “Written All Over Your Face” even show some early R&B influences. “The Truth” is a dreamy number that will have you tapping along in record time.

However the standout tracks for me are when Glenn decides to let everything loose. “Standing On The Rock” (with its unyielding guitars) and “Gasoline” sound close to coming apart at the seams (both vocally and musically) — and you begin to wonder if Hughes‘ voice will even survive to the end of the song. It is that reckless abandon that I enjoy most on Songs In The Key Of Rock, an album that every hard rock fan should investigate. More information can be found at glennhughes.com.