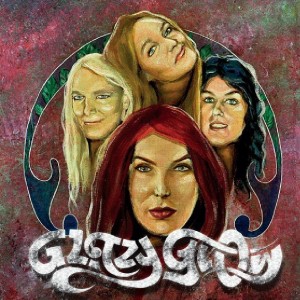 Review:
Those that know me know that I miss the glory days of glam — yes, the age of hair. Some of those bands have stood the test of time and also some have not. There was good and bad and everything in between and with this release from Sweden’s Glitzy Glow, I think they are firmly set in the “in between” category.

Glitzy Glow are from Sweden, home of Hardcore Superstar, Gemini 5, Crazy Lixx and Sister to name a few, so they are in good company and for the most part hold up well in the song department. There are some cool moments with times of nostalgia, some moments that had me wondering and plenty of glam styling grooves. Glitzy Glow play a hook friendly sort of modern day bubblegum pop rock. They could have been plucked from the scene back in the day because they do bring a lot of those elements and feel. They have a touch of early Crazy Lixx in their sound, mainly I feel because of guitarist Wingz, who gives them a slightly rougher more metal edge and makes for some cool solos. The music itself leans to the aforementioned glam spectrum for the most part and I get strong Lovemaker (NYC) connection in sound and to a slight extent their image also as well. I also dig how you can hear bassist Johnny Roxxy in the mix. During my first few listens of the album, I was slightly put off by vocalist Julia because her delivery is a bit monotone and lacks a dynamic or more charismatic approach, in which I think could really elevate the music. So with further spins, I have become a bit more accepting. I mean she is good in her own way but I think in glam/sleaze, you need a vocalist that lives/exudes that frontman/woman mentality. Another thing is the lyrics are bit childish/humorous. It could be the language barrier, so I won’t dwell on this too much.

All in all, a good throwback to the glory days of glam metal and it does carry on the torch for the most part, for those looking for a bit of color if you will, in their music.

Reviewed by Will “Bones” Lee for Sleaze Roxx, January 2016