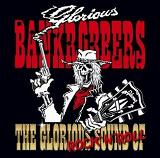 Review:
Seeing as the majority of great sleaze bands are coming out of Sweden these days, it is no surprise that one of the originators of that scene have decided to return to show the young guns how things are done. The Glorious Bankrobbers aren’t as heavy as many of the new bands, but what they lack in power they make up for in great songwriting and finesse.

Forming way back in 1983, it wasn’t until the late 80s when the band hit their stride with the killer Dynamite Sex Doze album. Now they are back with what is essentially a greatest hits collection, but because the old master tapes were lost over the years the band decided to enter the studio with Chris Laney and remix their best tunes and revive a couple of previously unreleased tracks.

This is as good as sleazy Swedish rock gets and I had forgotten how great these guys were/are. It is almost impossible not to sing along with such shit-kicking boogie-infused songs as “Spitfire”, “Hairdown”, “Young Alcoholic”, “Crazy Sioux” and the perfect “Dynamite Sex Dose”. It is insane that “Mum I’m A Loser” and “Blood Shed Twist” have been unreleased until now, because they rival anything the band ever released. Usually there is a reason why songs don’t make the final cut, but not in this case.

I could go on and on about how incredible this band and album are, but you might as well listen for yourself. Even though the Glorious Bankrobbers are one of those forgotten 80s bands, you have to think that they have been a huge influence on up-and-coming Swedish bands like Crazy Lixx and numerous others. I don’t know if new recordings are in the works, but I sure hope so. The sound of well done rock ‘n’ roll is glorious indeed.